On 23 July 2019, the Conservative party elected Boris Johnson to replace Theresa May as leader, and therefore prime minister. Johnson is unlikely to produce a solution to break the Brexit stalemate and bring the process closer to its eventual conclusion.

This is because the intractable issue at the heart of the stalemate – the lack of a majority in Westminster to either adopt Theresa May’s Withdrawal Agreement (WA), allow the UK to exit the EU without a deal, call a second referendum or revoke Article 50 – remains unchanged.

As a result, in our judgement-based forecast , we assign a 69% probability that the UK government will have no alternative but to call a general election before the end of the year.

The lack of any near-term resolution to the Brexit process means that uncertainty over the UK’s domestic regulatory regime and its future trading relationship with the EU is going to continue. 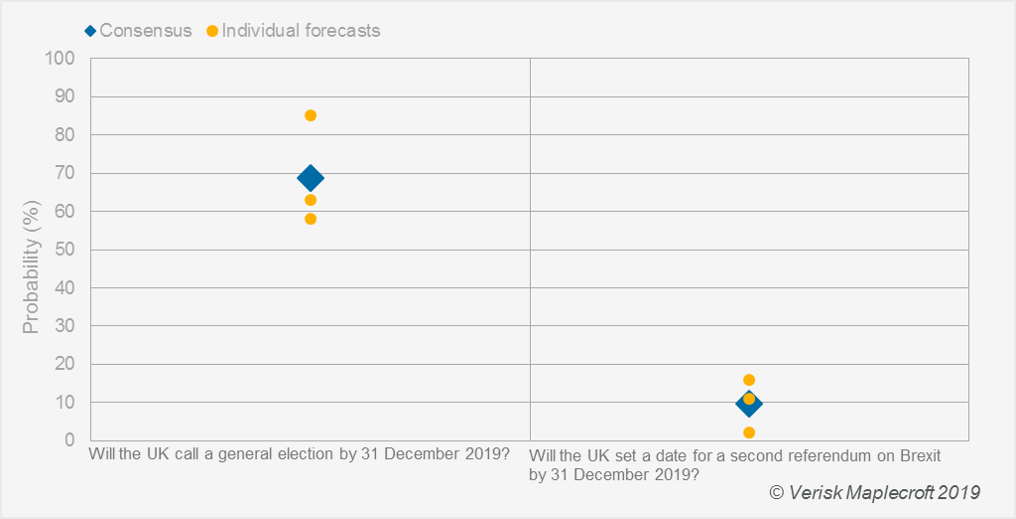 The high likelihood of a general election reflects our assessment that no consensus is going to emerge across the UK political establishment regarding a viable way forward.Johnson’s promise to renegotiate the Withdrawal Agreement is unrealistic and has been repeatedly rejected by the EU. As a result, Johnson lacks alternative fixes which would make the Withdrawal Agreement palatable to Conservatives and allow it to pass through Parliament.

At the same time, opposition to no-deal Brexit is widespread in Westminster, and MPs across the political spectrum would vote to bring down the government and trigger a general election to prevent it. This is a likely prospect especially as Johnson’s government currently has a majority of just two MPs.

While the simple lack of any viable alternatives renders an election the likeliest outcome, the potential triggers differ radically:

Will a general election break the deadlock?

A general election would most likely occur before the Brexit deadline of 31 October 2019.In this case, we expect that the EU would grant an additional, third extension to the deadline, probably until the end of the year.

We expect the EU would grant a third extension to the Brexit deadline - probably until the end of the year.

The outcome of a general election would nevertheless be very difficult to predict as polling indicates that four parties are currently estimated to receive around 20% of the UK vote. Coupled with the UK’s First Past the Post voting system, any one of those parties could end up capable of forming a government, whether independently or in coalition with another party.

It is also possible that the election would return a parliament in which no party or coalition of parties is able to form a government, which would necessitate a further general election.