Oil markets will be relatively insulated from geopolitical risks over 2018, barring a serious escalation on the Korean Peninsula or between Saudi Arabia and Iran, according to our Political Risk Outlook - Oil & Gas. However, the report also projects rising levels of government instability over the next three years in some oil and gas producing countries, including Russia, Kazakhstan, Egypt, Kenya and Uganda, that could impact upstream projects.

We use predictive data and analyst forecasts to assess the global risk environment for oil and gas companies and investors. The analysis evaluates geopolitical hotspots and the probability of military incidents or shows of force. It also examines the likely impact of country-level shifts in the political risk environment by mapping its Government Stability Index (GSI) projections against the capex (capital expenditure) forecasts of its sister company, Wood Mackenzie.

Recovering prices and the US oil boom have seen the heaviest capex investment in new upstream operations go stateside. As a result, we believe companies with investments skewed towards the US are reducing their overall above-ground risk exposure to volatility abroad.

Globally the picture is different though. Data from the Government Stability Index reveals that the stability of many producing countries with flows of upstream oil and gas investment is likely to worsen by 2021. Chief among these are Russia, Kazakhstan, Egypt, Uganda, Kenya and Ecuador, while Algeria, Vietnam and Colombia are also likely to see a deterioration in political stability. Downside scenarios would put these in or close to the 'high risk' category of the index. 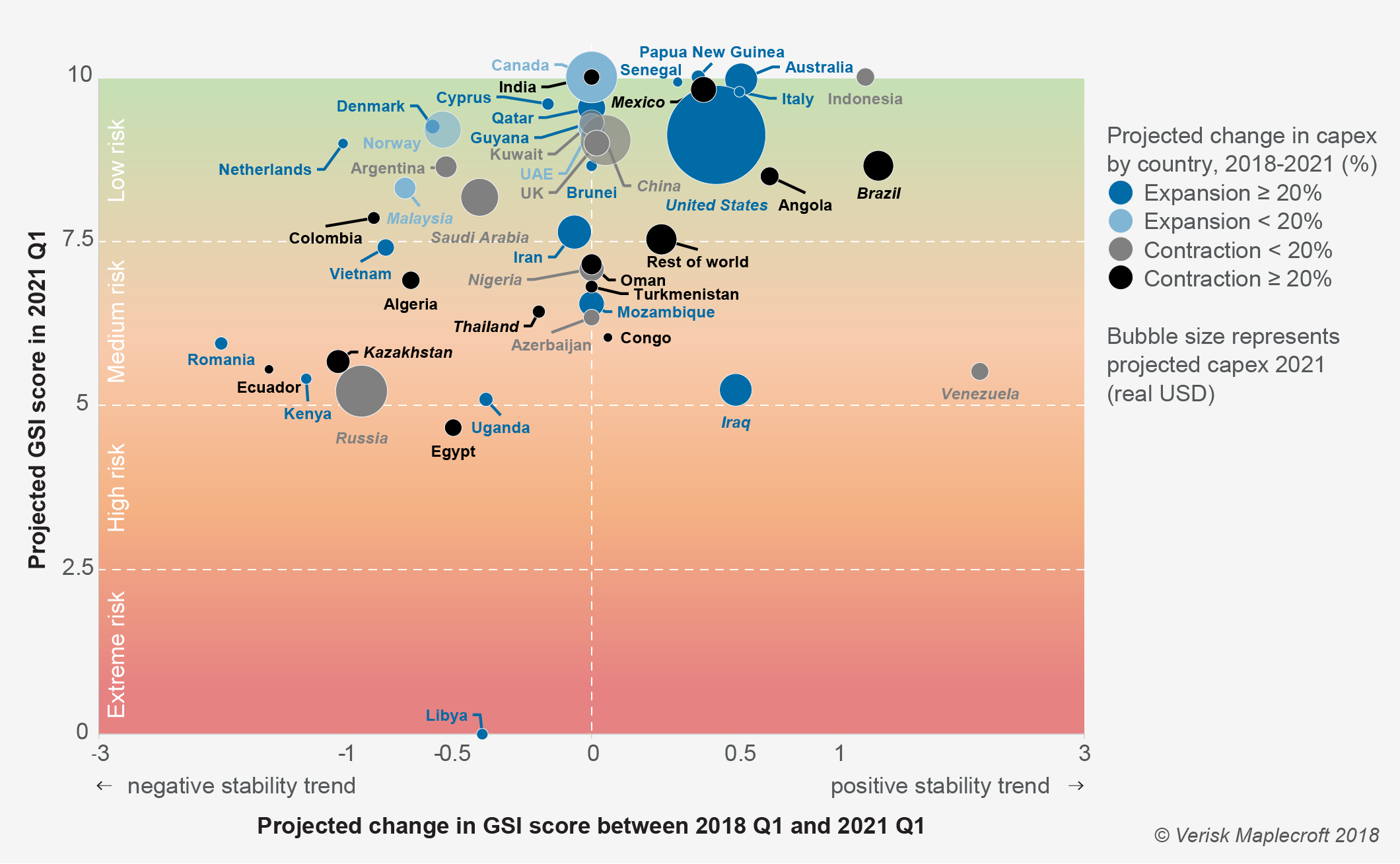 Uncertainty and downside risks to prevail among major oil producers 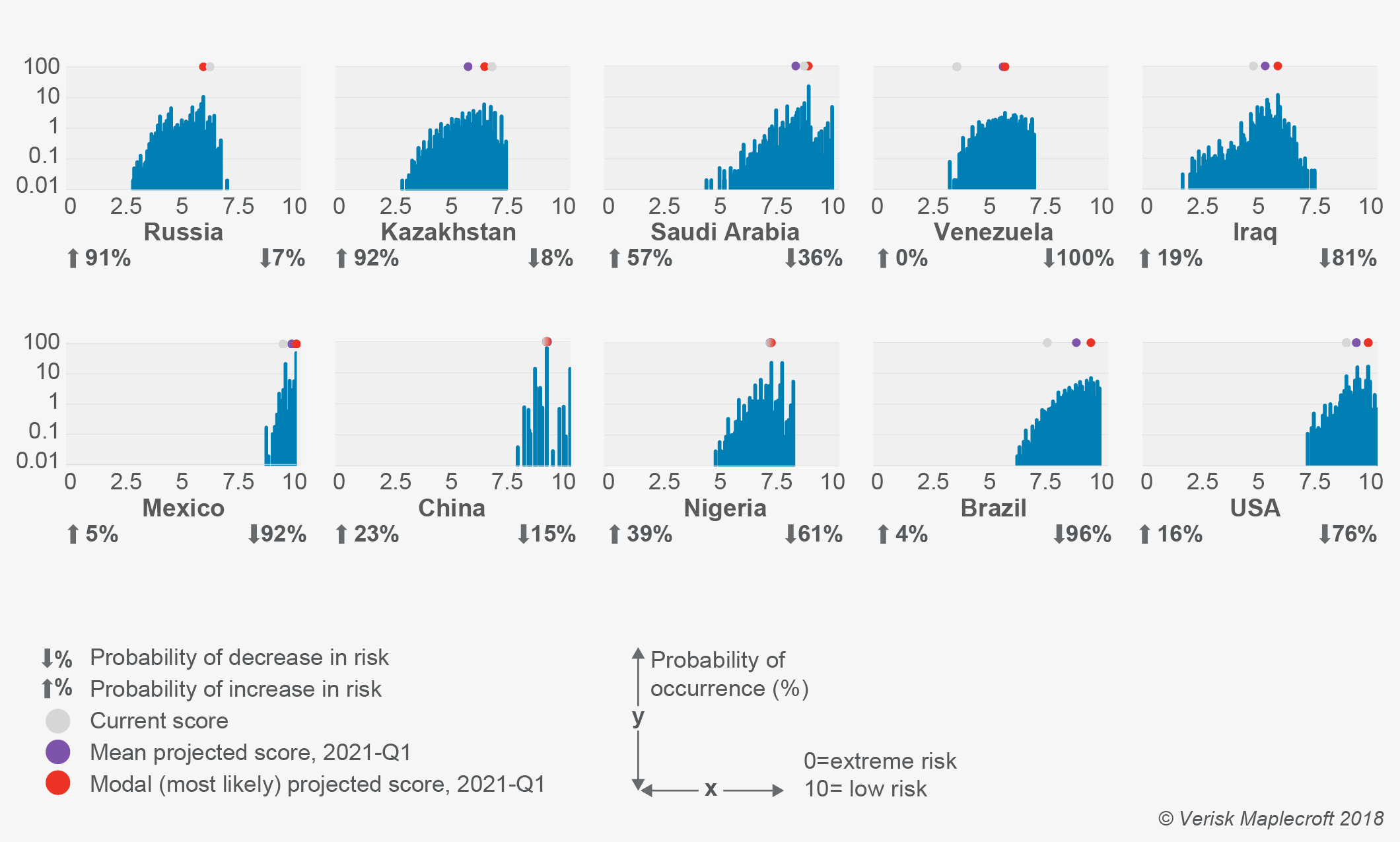 Uncertainty and downside risks to prevail among major oil producers

We identify the global trend as negative. The producer countries expected to be less stable in 2021 significantly outnumber those with an improving risk environment and they represent a large, albeit declining, share of capex spend. The report states that low prices are a contributing factor, at least outside the Middle East, while geopolitical shifts and a rollback of democratic institutions will play a role in the decline in stability for some countries.

"We don't see increasing instability necessarily ending in coups or significant political upheaval, but a less predictable above-ground-risk environment is likely to emerge,"

Arbitrary decision making, possible measures to buy off key stakeholders or an inability to pass regulatory reforms will be the main risks to projects in these countries, as their governments seek to stabilise and maintain their influence.

For upstream investors with exposure to Russia and Kazakhstan, succession is a key concern, as uncertainty increases over who will succeed Putin and the ageing President Nazarbayev. It is over 90% likely that stability will fall in these countries according to our GSI, with worst-case outcomes seeing them slip from 'medium' to 'extreme risk.'

In the geopolitical arena, we see the stand-off on the Korean peninsula and the ongoing 'cold war' between Saudi Arabia and Iran as the only two geopolitical flashpoints with realistic potential to impact oil prices if they escalate in 2018.

According to its Interstate Tensions Forecasting Model, outright war in either region is unlikely, despite an increase in the probability of a military incident or show of force between the US and North Korea, which has increased from 36% to 56% since the start of 2017. The likelihood for a direct militarised dispute between Saudi Arabia and Iran is lower at 26%, but a continuation of their regional war-by-proxy is expected in the Middle East's primary conflict zones, Syria and Yemen.

A slide into war is not in the interests of any of these countries, but the Outlook highlights the aggressive posturing from all sides as intensifying the chances for tensions to escalate. In the worst-case scenario, war between Saudi Arabia and Iran would hit oil supply and cause a spike in prices, while conflict on the Korean Peninsula would have serious negative consequences for the global oil and liquefied natural gas trade.

We also highlights lower impact outliers for industry insiders to watch in the geopolitical space. On 11 February, Turkey responded to Greek Cypriot natural gas exploration in the Eastern Mediterranean by using its navy to block a drilling vessel from entering the area. The show of force is the worst escalation in Greek/Turkish hostilities since Cyprus struck gas in 2011. A dynamic reflected by the 66% chance of a military incident in its Interstate Tensions Model.

Our Political Risk Outlook Oil & Gas analyses some of the primary issues impacting energy companies in 2018 and beyond. The full report will give oil and gas companies a unique perspective on the political risks impacting markets, exploration and production, as well as the move towards renewables.