Despite President Trump’s claims that North Korea will become an “economic powerhouse,” Kim Jong-un’s authoritarian regime has been classified as the world’s most perilous investment destination for business.

We used our portfolio of global risk indices to stress test the US president’s assertions by measuring the investability of 198 countries across the key areas of corporate governance; the regulatory framework; property rights protections; and respect of human rights.

The 10 least attractive countries in the world for investors

The fact that North Korea performs worse than failing states and countries that are home to extreme levels of conflict and instability is a telling indictment of the country under Kim’s regime. Investors are of course aware of the challenges associated with North Korea, but our latest index data reveals an array of risks without parallel anywhere in the world.

Even leaving sanctions and geopolitical risks aside, the barriers to investment are so wide-ranging as to be insurmountable for any responsible multinational organisation.
-Miha Hribernik, Head of Asia Research

No sign of progress for North Korea’s investment environment

North Korea performs the worst globally on all the chosen indicators of investability, including the most severe forms of human rights violations.

In the unlikely event sanctions were to be removed or lessened any time soon, the problems facing would-be investors are put into stark relief when comparing the country to advanced economies in the region. It would take a gargantuan leap for the regime in Pyongyang to even begin to approach the investment attractiveness of South Korea. However, there are no tangible signs of imminent domestic reforms. While it has allowed a partial liberalisation of the economy in recent years, most visible in the form of hundreds of markets that have sprung up across the country, the government has yet to show interest in addressing any of the accompanying political, regulatory or human rights risks. 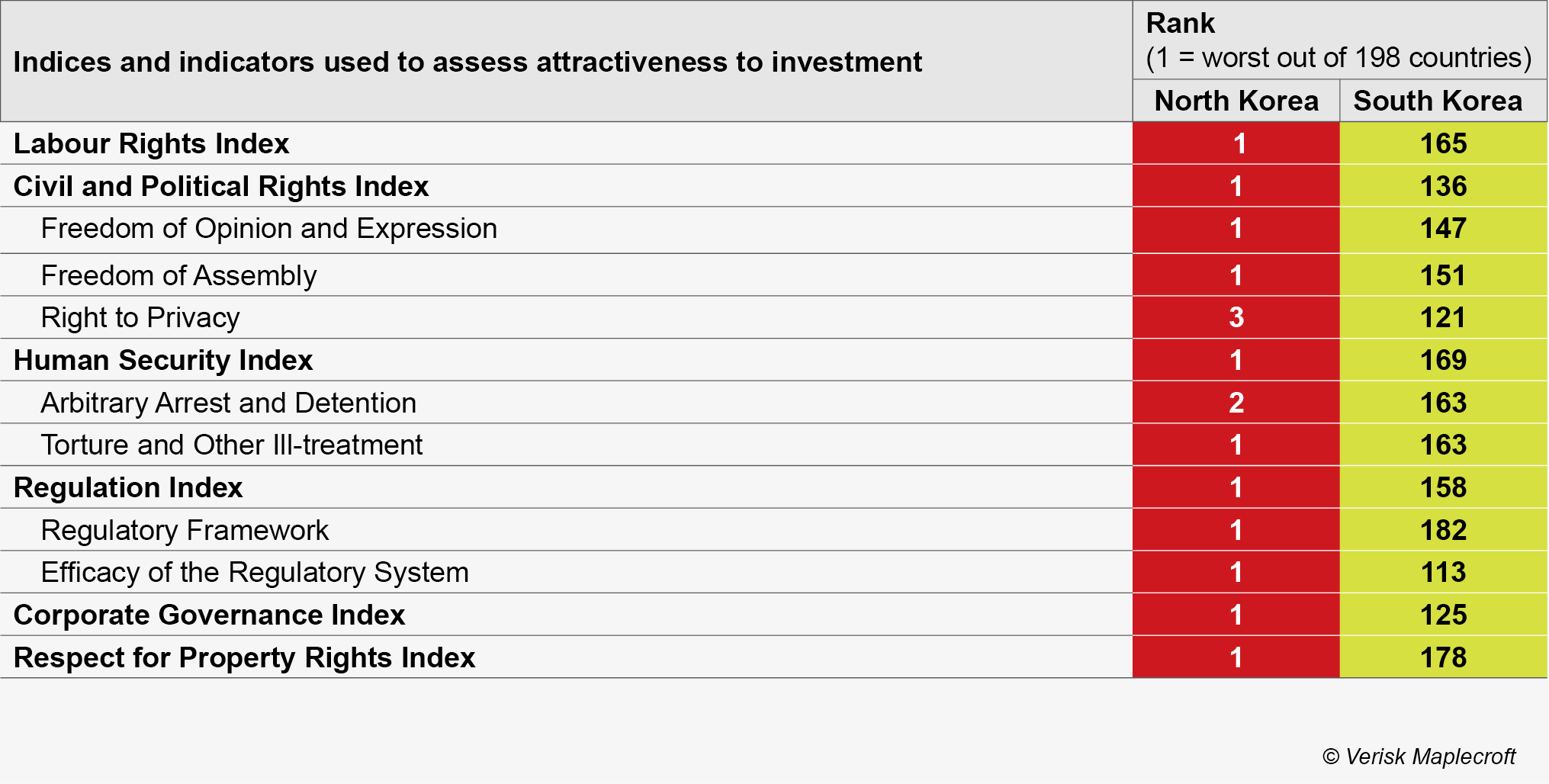 Similarly, there have been very few signs of progress on the geopolitical front since the Trump-Kim summit in Singapore in June 2018, leaving a roll-back of sanctions a remote prospect. A significant and sustainable breakthrough during the upcoming talks in Hanoi is not expected. Although it is possible that the two leaders will agree on a declaration to end the Korean War, this alone would be insufficient to trigger a lifting of economic sanctions. The Trump White House has repeatedly stated that it would not do so without substantial movement on denuclearisation – something that we believe is exceedingly unlikely to happen for the foreseeable future.

What, if anything, can Kim do?

If North Korea is to become a potential investment destination for even the least ethically sensitive investors, Kim faces a monumental task in which he personally has little to gain and everything to lose. The first step would be to close the country’s notorious forced labour camps. After that, attracting foreign investment would require reforms to every facet of the state, including the regime itself. The release of political prisoners, followed by a complete overhaul of the regulatory system and state institutions would have the potential to destabilise the country and threaten the very survival of the Kim dynasty.

The likelihood of such a seismic shift over the coming years is extremely low and North Korea is set to remain the least investable country in the world.

Whatever potential Trump sees in Kim’s regime, the vast majority of investors are unlikely to act on his claims.The stakes are just too high.