A perfect storm: the costs of being resilient

Natural disasters in the US

Rising costs of natural disasters in the US

The costs of natural disasters in the US are increasing, presenting escalating challenges for business. The National Oceanic and Atmospheric Administration (NOAA) estimates that in 2017 alone, weather-related natural hazards cost the US over USD300 billion.

The number of very high-cost events experienced is also rising. The average number of billion-dollar disasters affecting the US annually was 5.7 between 2000-2009. This doubled to 11.4 for the period 2010-2017.

The impact of natural disasters on business in the US is substantial because significant proportions of economic activity and population are located in areas where natural hazards can occur. We used our suite of natural hazard indices to get an idea of the exposure in selected regions. 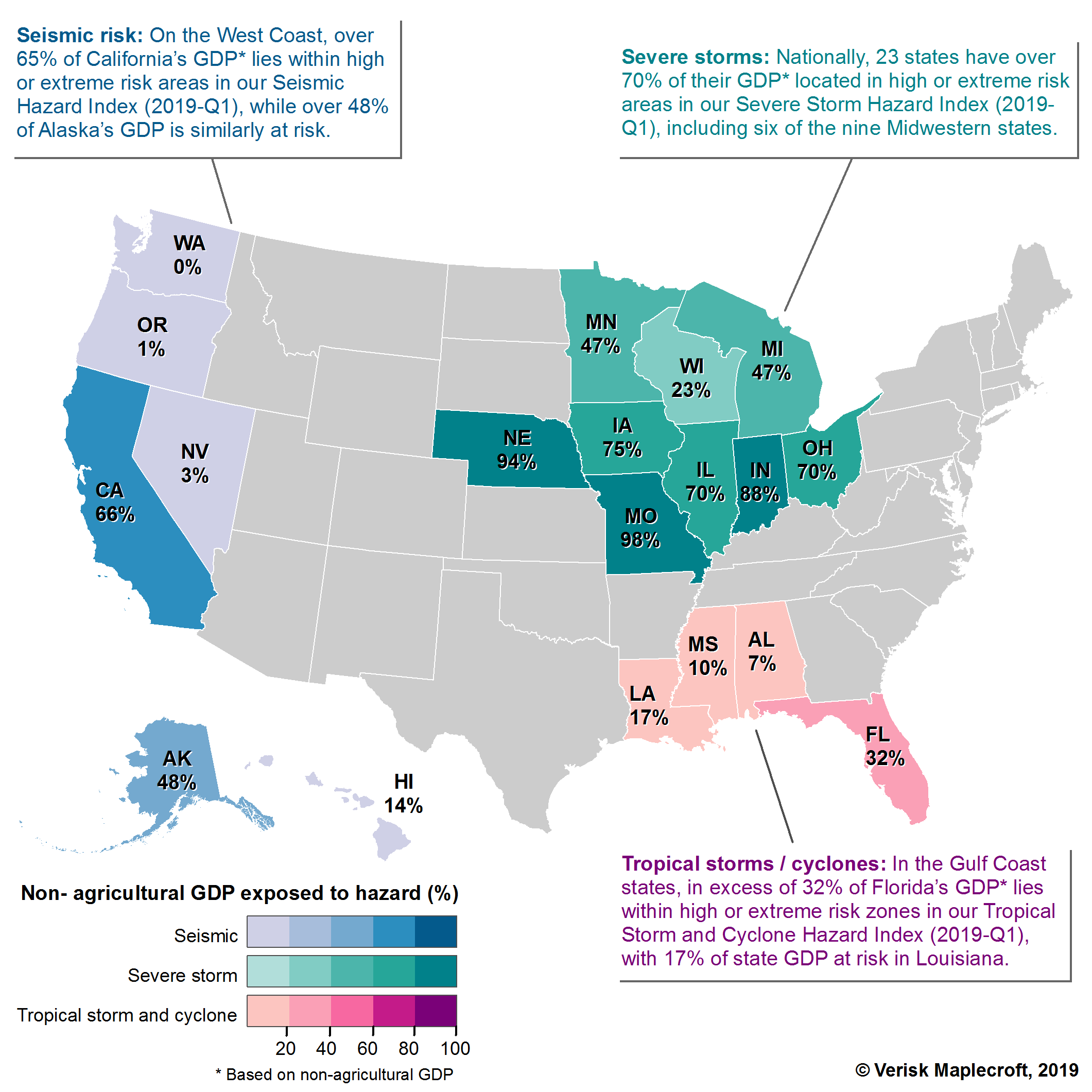 Prevention is better than cure, but a tougher sell

Despite the US’s ability to fund disaster management activities, the impact of natural disasters on business will continue to be experienced across all sectors. The federal stance on disaster spending has been squarely positioned around funding post-event activities, once impacts have occurred. A recent investigation by the Pew Charitable Trusts identified that the vast majority of disaster mitigation funding provided by FEMA - 84% - comes from a programme that is only triggered by a federal disaster declaration.

Pew also highlighted that the tracking of state spending on mitigation and recovery from natural disasters in the US is unsystematic and inconsistent, presenting further obstacles to demonstrating the value of preparedness actions. The National Institute of Building Sciences estimates that every USD1 spent on mitigation saves taxpayers USD6 in recovery costs. However, pre-disaster spending on preparedness is a far harder action to motivate because the benefits are contingent on an event which may not occur.

Although the government has sought to increase funds for disaster spending, the Trump administration seems unlikely to assist in driving a refocus towards pre-disaster mitigation.

In August 2017, President Trump removed the requirement for federally-funded infrastructure projects to incorporate climate change and sea level rise considerations into their design.

So while the US is in a position to recover from natural disasters, paradoxically, its capacity to afford this somewhat perpetuates the disruption threat. Reconstructing damaged assets in the same high exposure locations they initially stood maintains the high-impacts cycle, as well as diverting spending from mitigation efforts.

Compounding this situation, climate change projections indicate that the hydro-meteorological natural hazard threat the US faces will increase over time. Some studies anticipate an increase in the frequency of the most intense hurricanes in the North Atlantic in future, while the rate of occurrence and intensity of heavy rainfall events is projected to increase across all regions of the country.

How can companies fight back?

Faced with the high cost of natural disasters and impacts on business, companies need to prepare for ongoing disruption from natural hazards. Large-scale events can generate challenges such as supply chain interruptions and asset damage. Issues with workforce availability arising from displacement, protracted waits for reconstruction funding and permanent relocations are also a very real threat. Two years after Hurricane Katrina hit New Orleans in 2005, the Louisiana Workforce Commission reported there were 60,000 job vacancies in the city.

In addition to operational disruption, repeated, costly natural disasters in the US may also have implications for the affordability of insurance, a measure commonly used for transferring the risk of a presence in exposed locations. While not the only factor driving premium increases in the US’s litigious climate, increasing numbers of claims can result in rate increases. Even the federally run National Flood Insurance Program continues to raise premiums as it attempts to tackle its growing deficit in the face of ongoing and substantial claims from flooding events.

Last year’s California wildfires underscored a further threat that may not be on many corporate radars: companies also need to consider whether their operations could increase hazard threats under extreme environmental conditions. Utility provider Pacific Gas & Electric Corp previously received high ESG scores from numerous rating agencies but has filed for bankruptcy in the wake of multiple lawsuits alleging that sparks from its electrical infrastructure may have started the fires in the tinder-dry landscape. As if scenario analysis wasn’t tricky enough, the examination of a business’s financial exposure to physical climate risks now has another dimension to consider.

Tackling vulnerabilities in the operating environment is a tall order – and indeed often impractical – for any one company. However, the plethora of sustainability reporting frameworks that have sprung up in the past 10 years create an interesting avenue for the private sector: a shareholder-sanctioned mechanism to pursue risk reduction collaboratively and in a socially responsible manner.

From the TCFD recommendations to map out commercial exposure to physical climate risks, to the push to align corporate actions with the UN’s Sustainable Development Goals (SDGs) – many of which incorporate disaster resilience as a core tenet – multiple opportunities exist to meet these objectives via actions that increase resilience in the wider operating context.

With action on climate risk in the US becoming increasingly devolved, companies need to adopt a pre-emptive approach to reduce the impacts of natural disasters on business.