With the EU Conflict Minerals Regulation coming into force in January 2021, businesses that import tin into the EU from conflict-affected or high risk areas will be required to carry out due diligence on their supply chains. This includes areas in a state of armed conflict, fragile post-conflict states and areas with systematic violations of international law, including human rights abuses. This will include identifying and assessing ‘red flag’ issues upstream of the smelter and refinery level, which is particularly challenging due to the opaque nature of the mine-to-smelter link of the chain.

Indeed, our research shows that companies sourcing tin from certified Conflict Free Smelters (CFS) in China may be linked indirectly to a myriad of risks associated with armed groups and human rights abuses across the border in Myanmar.

The difficulty of traceability beyond the smelter

Historically, most tin produced in China has been used for domestic consumption. For foreign companies, the greatest risk of exposure to conflict minerals has been with tin used for goods manufactured in China that are exported globally and would not fall under the EU conflict mineral regulations, including electronics products such as phones and computers.

However, China’s position as a tin exporter is increasing and the government hopes to increase its share of global exports as part of its strategy to grow its influence over prices in global metal trading markets. To this end, the Chinese government is planning to waive VAT on tin exports comprised of imported concentrate. The incentive to use imported raw materials for tin destined for export means that tin produced for export will have a greater risk of containing conflict minerals. These exports will fall under the new EU regulations,

China imports 96% of tin ore from Myanmar, much of which originates in Yunnan province, a key tin mining, processing and export hub. Tin ore from Myanmar criss-crosses a complex and sometimes illicit supply chain to reach Chinese smelters.

Thus, it remains extremely difficult to identify which tin exports from China originated in Myanmar, but it is likely that tin from Myanmar is present within the supply chains of multinationals sourcing from China.

A first crucial step towards understanding risk exposure across multinational supply chains is to conduct a risk mapping exercise focusing on risk issues present at the country or mine level. Many companies can successfully trace their tin supply chain to the critical smelter and refinery level in China, the conversion point at which raw materials are transformed into a recognisable product for downstream users. However, assessing risk further upstream at the mine level continues to pose considerable challenges, presenting several problems for businesses attempting to develop transparent sourcing practices. To comply with the ever-evolving regulatory environment, businesses will need to map and assess their supply chain risks to source.

While many companies source tin from Chinese smelters certified by the Conflict-Free Sourcing Initiative (CFSI) as Conflict Free Smelters (CFS), Myanmar is not considered a conflict-affected area by the CFSI, and is therefore not currently covered by their audits. However, this could change if the group decides to add Myanmar and other conflict affected regions to the scope of the programme during the group’s annual policy review. To ensure alignment with the new EU-Conflict mineral regulation, those companies sourcing tin directly from Chinese smelters for manufacturing in the EU will now need to carry out additional due diligence to ensure they can identify and assess actual and potential risks linked to other ‘conflict-affected and high-risk areas’. 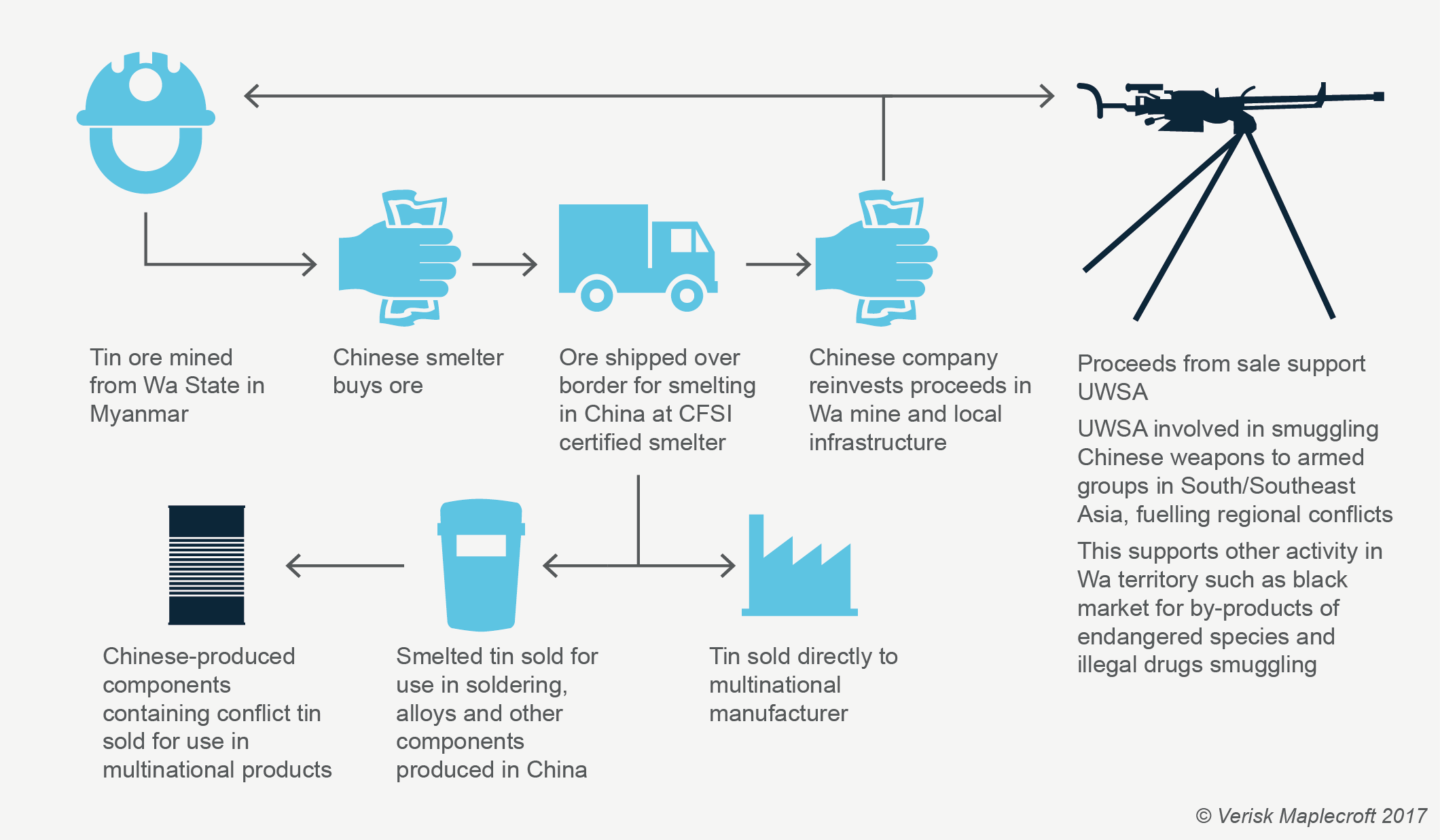 In Myanmar, deposits have traditionally been exploited in the southern provinces of Kayah, Mon, and Tanintharyi. However, deposits are also located in Kachin and the unrecognised Wa region on China’s southern border. Indeed, the discovery of large quantities of tin ore in Wa’s Man Maw region in 2013 resulted in the country’s burgeoning tin sector attracting international attention because of the mine being controlled by the United Wa State Army (UWSA), which in 2003 was sanctioned by the United States for narcotics smuggling.

Man Maw mine is estimated to produce 33,000 tons of tin concentrate annually, which is more than a 10th of global production. However, Wa State does not have any tin smelters, so the tin ore is exported primarily to Yunnan, which is one of China’s largest tin producing provinces and home to about 16 major tin producing companies. The tin is then processed for use in products such as solder that is used to make electronic components and tin paste, which is exported globally and ends up in the supply chains of western companies. In 2016, an investigative Reuters report identified that tin ore from the armed group-controlled mine may end up in the supply chains of around 500 multinationals, including several NASDAQ-listed companies.

In our assessment of 20 key political, human rights and environmental issues related to the extraction of tin globally, we identify Myanmar as the second highest risk region for tin mining globally, only just behind the DR Congo.

A majority of tin exports from Myanmar to China originate in the unrecognised Wa State, which is effectively controlled by the strongest and best-equipped non-state army in Myanmar, the United Wa State Army (USWA). The UWSA remains on the United States’ Specially Designated Nationals (SDN) list for its alleged drug trafficking activities, meaning that companies with Wa tin in their supply chain face a huge legal and reputational risks of being accused of directly or indirectly supporting sanctioned non-state armed groups.

Furthermore, corruption risks in the region are accentuated even further by the opacity of structures of the de-facto government. The operations of mines in the area, and ensuring export flows to China is almost certainly prone to illicit payments.

Tin mines outside of the Wa region are also highly impacted by human rights and environmental issues. Weak law enforcement, coupled with corruption fuel forced labour and human trafficking, present significant risks for businesses operating in, or working with, the extractives sector in the country. Moreover, tin production in southern and eastern Myanmar has been linked to several water pollution incidents in the past five years.

What does this mean for business?

Turning a blind eye to the risks further upstream and beyond the smelter in the tin supply chain jeopardises a company's ability to protect itself from both reputational risks and regulatory penalties. Companies that use indirectly sourcing minerals from conflict-affected or high-risk supply chains – including Myanmar - need to assess their supply chains to source, using well-established due diligence systems and practices to comply with new legislation and to identify risks/impacts that may be linked to their business.

While companies have rightly focused their efforts on eliminating the use of 3TG minerals linked to conflict in DR Congo as dictated by the Dodd-Frank Act, a raft of emerging supply chain legislation will require them to focus on the bigger picture where sourcing minerals from different countries. As exemplified by tin production in Myanmar, the failure to do so can result in businesses being linked to armed groups which contribute to regional terrorism, human trafficking, drug production and other illegal markets that incentivise corruption and plague state institutions.

For more information about our commodity risk service contact info@maplecroft.com