Modern slavery rife in 58% of countries

Modern slavery constitutes a ‘high’ or ‘extreme risk’ in 115 countries, according to our new global ranking. The research concludes that Asian and African commodity producers and manufacturing countries pose the greatest challenge to companies navigating new legislation on supply chain disclosure, such as the UK Modern Slavery Act. Significantly, the Asian heavyweight exporters of China and India feature in the ‘extreme risk’ category, alongside important natural resource hubs, including DR Congo, Iran and Côte d’Ivoire.

With only four major Western economies – the UK, Germany, Denmark and Finland – rated ‘low risk’, the authors of the study also stress that nowhere is fully immune to what British Prime Minister Theresa May has dubbed “the great human rights issue of our time”. The UK is ranked 187th out of 198 countries in the index. A number of European economies, such as Sweden, France and Ireland, are on the cusp of being ‘low risk’.

Our methodology for the Modern Slavery Index was developed over the course of the last 12 months and uses multiple data sources to benchmark the risk at a global scale. The company has aligned its research with the definitions of slavery laid out in the UK Modern Slavery Act by analysing the breadth of national legislation; the quality of law enforcement; and reported evidence of trafficking, forced labour, servitude and slavery. The index will enable companies to perform a top-level risk assessment of their exposure to modern slavery that can be used in mandatory statements. 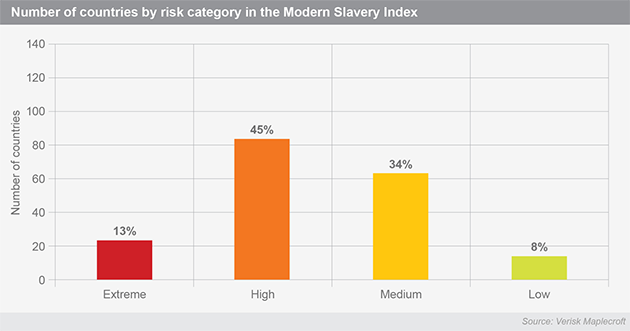 While most multinational companies have robust systems in place to ensure slavery does not occur among their tier 1 suppliers, key numbers emerging from the research expose the extent of the challenges facing them lower down the supply chain, at the commodity level and from subcontractors.

Companies are heavily reliant on goods and raw materials from India and China. However, sourcing from these countries can come with a substantial risk of association with forced labour. The risk is endemic in India’s agricultural sector and is prevalent in parts of its garment sector. The exploitation of children in the mining of minerals is also common. Forced labour, including the exploitation of young apprentices, occurs across multiple sectors in China, including electronics production, mining and agriculture. These risks are echoed across many Asian markets.

Enforcement: A key indicator of change

The UK is leading the way in establishing regulation on slavery. The Modern Slavery Act forces large UK and international companies that supply goods or services within the country to disclose what measures they are taking to remove slavery from their global supply chains. At a domestic level, high-profile incidents of slavery frequently occur in the UK in sectors such as agriculture and the service industry. However, the recent creation of a government taskforce to train the police to identify and investigate slavery-related crimes was a key factor in the country’s strong performance in the index’s enforcement pillar, which inched it into the ‘low risk’ category. Maintaining this rating will hinge upon the success of this initiative.

According to the research, the EU as a whole is rated ‘medium risk’. The fact the region does not perform better is largely explained by the refugee crisis and the exploitation of foreign migrants and refugees.

“When countries with the most advanced legislation struggle to completely eradicate slavery, it reveals the challenges governments in less developed regions face,” states Principal Human Rights analyst Alex Channer. “Many of the highest risk countries do have legal frameworks in place, but a lack of resources and widespread corruption means the enforcement of such laws can be haphazard.”

The German Supply Chain Due Diligence Act: A Simple Guide