The spread of violence and instability from Syria and Libya; increasing terrorism across key growth economies; the heightened risk of social unrest driving regime change; and resource nationalism will be the drivers of political risk for 2013, according to our fifth annual Political Risk Atlas.

Political violence forms a key pillar of dynamic risk and constitutes a major destabilising influence on the investment climate of affected countries. The Atlas details a trend of escalating political violence, with 20% of countries host to a substantial increase in risk. Among the countries worst affected is conflict torn Syria, which ranked second most at risk in our Conflict and Political Violence Index, scoring only marginally better than Iraq. Additionally, ongoing violence, acts of terrorism and low levels of human security in Libya account for the country moving from ‘high’ to ‘extreme risk.’ 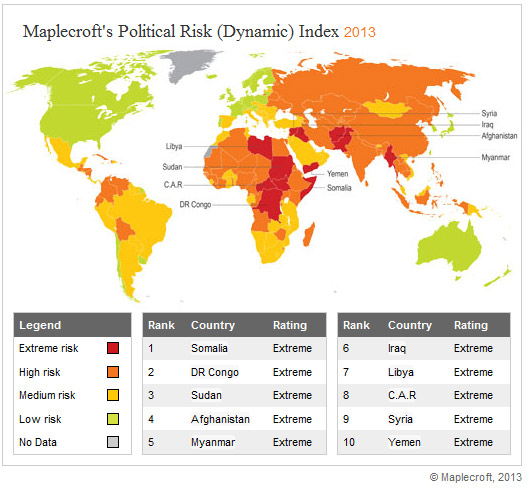 The impacts of violence and instability in Syria and Libya are also being felt beyond their own borders. The proliferation of weapons from the former Gaddafi regime continues to feed instability from Mali to the Sinai; a ‘spill-over’ of the Syrian violence is deepening sectarian fault-lines in Lebanon; while Turkey’s security situation is worsening.

Increased risk of terrorism in the growth economies

For the first time in five years, Turkey has been classified as ‘extreme risk’ in our Terrorism Risk Index, reflecting increasing terrorist attacks by the separatist Kurdistan Workers’ Party (PKK). However, the PKK, which has the backing of Syria and Iran in response to Turkey’s financial and logistical support of the Free Syria Army, has for the moment concentrated its attacks to the south and east of the country; the effects on the country’s economy have been limited.

Outside of Turkey, we identify an increasing trend for terrorism across some of the most promising growth economies. Nigeria, the Philippines, Colombia, Thailand, India and Russia are among 18 countries classified as ‘extreme risk.’ While the potential economic gains from operating in these countries is still high enough to attract investors, the steps required to mitigate threats to employees, assets and supply chains is increasing the costs for business, including for insurance. Our subnational mapping of terrorism shows that the threats in these countries are often localised though, leaving certain regions of the same country more attractive to investment.

Despite the high hopes of 2011, the ‘Arab Awakening’ countries of Yemen, Libya, Egypt and Tunisia remain ‘high risk’ countries in our Societal Forced Regime Change Index. Improvements in economic opportunities and civil and political rights have failed to materialise in the time since their respective revolutions. As a result, popular frustration over corruption and the pace of political and economic reform continues to spur societal unrest and high levels of political uncertainty, leaving these countries in a fragile position.

Situations of societal forced regime change across the Middle East and North Africa, coupled with the prevailing high risk of similar types of regime change in other nations, poses significant risks to business continuity plans. In light of the financial, logistical, reputational and security implications of the Arab Awakening, assessing the likelihood of such an occurrence in other nations has become of primary concern for investors. Attention has therefore turned to those countries possessing pre-Arab Awakening conditions, such as a lack of civil and political rights, income inequalities and relatively high levels of digital inclusion.

In this regard, we highlight the following countries among those most at risk of societally induced regime change: Guinea Bissau, Zimbabwe, Syria, Madagascar, South Sudan, Pakistan, Yemen, Mali, Bangladesh, Kenya and Turkmenistan. What actually transpires will be defined by the extent of intransigence of the ruling powers and the extent of positive reform that the government is able to undertake to quell societal disquiet.

Resource nationalism likely to increase over 2013

We also identify the increased prevalence of expropriation and resource nationalism as one of the key risks for 2013, which in some countries is used as a political bargaining chip to appease societal concerns. In response, we have developed an Expropriation Index to evaluate both the risk of the outright nationalisation of privately-owned businesses and the threat of ‘creeping nationalisation’ involving a gradual seizing of private property rights. Twenty one countries have been classified as ‘extreme risk’ for expropriation risk, including the resource rich countries of Guinea (ranked third most at risk), DR Congo (4), Libya (6), Myanmar (9), Turkmenistan (11), Guinea-Bissau (13), Equatorial Guinea (14), Venezuela (16), Angola (17), Tajikistan (18), Bolivia (19) and Kyrgyzstan (20).

The nationalisation of YPF in Argentina provided the most notorious example of resource nationalism in 2012. However, the threat to investors increasingly comes from far more sophisticated measures, including royalties and taxation. Given persistently high commodity prices, the risk of resource nationalism is likely to grow in 2013, and as the tactics used by governments to extract value from their natural resources grow more sophisticated, they will become difficult to avoid, particularly because they are responding to the growing demands of local communities and indigenous groups for greater shares in natural resource revenues.

US undergoing an emerging market moment