Another judicial red flag for mining in Ecuador

On 26 April, a provincial court in Pastaza ruled that Ecuador’s government had infringed the constitutional right of the indigenous Waorani people to free, prior and informed consent (FPIC) in a consultation process held back in 2012. As a result, the government is not allowed to licence oil block 22 in the area, located within 200,000 hectares of rainforest in the north-east of the country.

The Ministry of Energy and Non-renewable Natural Resources will appeal the decision. Both the 2008 Constitution and the various international treaties to which Ecuador is party - including ILO 169 - oblige the Quito government to seek the free and informed consent of any community that could be affected by extractive projects.

This is yet another problematic ruling for the left-wing government led by President Lenín Moreno, which is set on opening the country’s considerable untapped oil and minerals wealth to foreign investment. As district judges become more prone to rejecting the government’s narrow definition of territories or communities entitled to FPIC, the risk of project delay or termination will continue to rise.

While the government has reworked the country’s oil and mining regulatory frameworks and introduced new investment incentives, the long-held public sentiment in Ecuador against extractives remains strong, and is feeding into fresh operational and judicial instability in the sector. This latest ruling is the third instance in the past year of provincial courts going against the state, and adds to international jurisprudence with negative consequences for the sector’s outlook.

Ecuador has yet to fully facilitate the right of indigenous peoples to prior consultation, with communities turning to litigation. Major gaps in FPIC implementation drive Ecuador’s high-risk score of 3.65/10.00 in our Indigenous People’s Rights Index 2019-Q2.

Judicial rulings for the mining sector in Ecuador

Judicial rulings for the mining sector in Ecuador

In a related development, a Quito judge in February greenlighted a popular consultation in the canton of Girón, in the province of Azuay, suggesting that other forms of community challenge to investment could also rise in the coming years. In that case, the community voted against mining activities in a popular referendum (consulta) held alongside the 25 March regional election.

To date, the Moreno government has not sought recourse to the final instance - the country’s Constitutional Court – suggesting that the energy ministry does not want to run the risk of losing a high-profile constitutional court ruling, which could place at risk the legal stability of the extractives sector.

How likely is an anti-government movement?

The Confederation of Indigenous Nationalities of the Ecuadorian Amazon (Confeniae), representing 1,500 indigenous communities, will interpret the Pastaza ruling as setting legal precedent nationwide. With Confeniae rejecting the government’s decision to appeal, the stage is set for further acrimony between the Quito executive and indigenous communities.

And with the country’s leading labour unions simultaneously pledging a “combative” response to the government’s IMF-advised austerity measures, we see a growing risk that these two campaigns - anti-IMF and anti-extractives - will coalesce into a single anti-government movement. It is not that long since Ecuador lost several presidents successively to such street-based movements.

Although our Government Stability Index projection does not project such a scenario in the coming six months (see below), simmering social discontent - both urban and rural - could yet create a real headache for the increasingly unpopular President Moreno, and damage investor sentiment in the extractives sector. 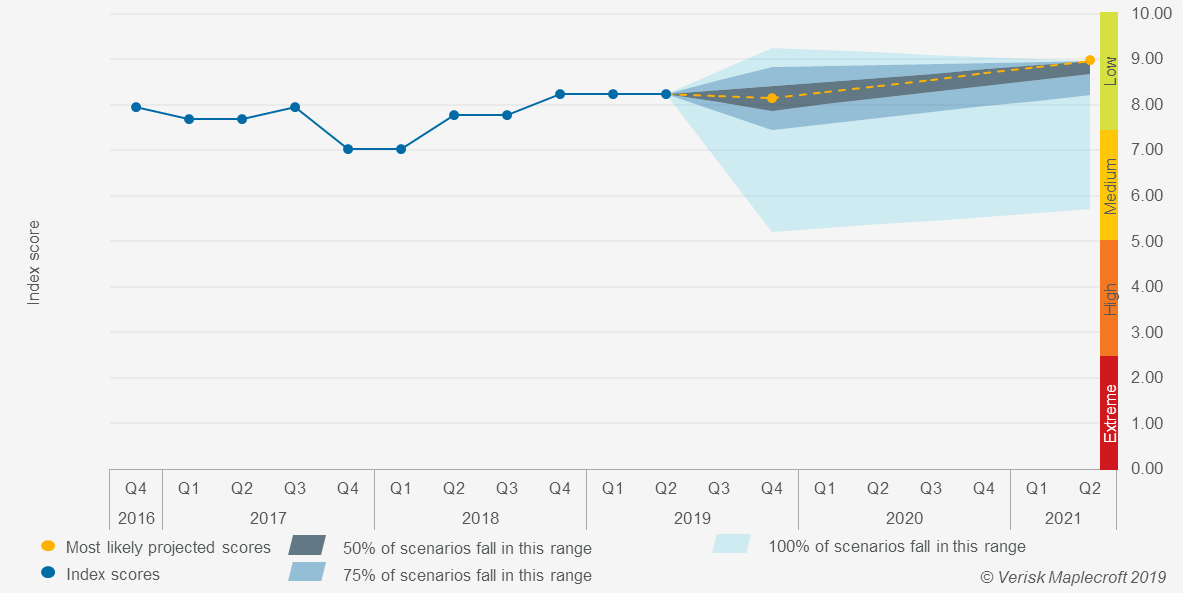