Is trouble brewing in the emerging market universe?

Signs of stress in several large emerging markets (EMs) do not point to an impending wave of crises. However, we do anticipate a phase of weakening growth and asset prices that will push EMs into a bear market from late 2018.

After a two-year bull run and an extended period of macro stability, EM investors got a jolt in May. The still-fragile nature of Argentina’s economic fundamentals became painfully clear as market pressures forced the central bank into a series of increasingly drastic measures to support the currency. In Turkey, meanwhile, investor concerns over the country’s deteriorating fundamentals and unorthodox policies contributed to a sharp, albeit short-lived, sell-off in the lira.

Still, analysts are split over how much to read into these recent developments. On the one hand, problems in Argentina and Turkey can be viewed as an unwelcome, but not entirely unexpected, blip in two relative outliers struggling with their own structural problems. This is the more optimistic assessment. A gloomier interpretation would be that the events of the past few weeks are a sign of things to come as more restrictive global monetary conditions start to bite.

Fed set to pull out the rug from under emerging markets

Indeed, the ‘normalisation’ of monetary policy in the West will be by far the biggest economic headwind for developing countries over the next few years. Starting in 2009, purchases of assets (also known as quantitative easing) by the US Fed and its counterparts in the UK, Eurozone and Japan drove massive amounts of liquidity into EMs, pushing up valuations for stocks and bonds. This engine is about to go into reverse as central banks unwind their crisis-era balance sheets. 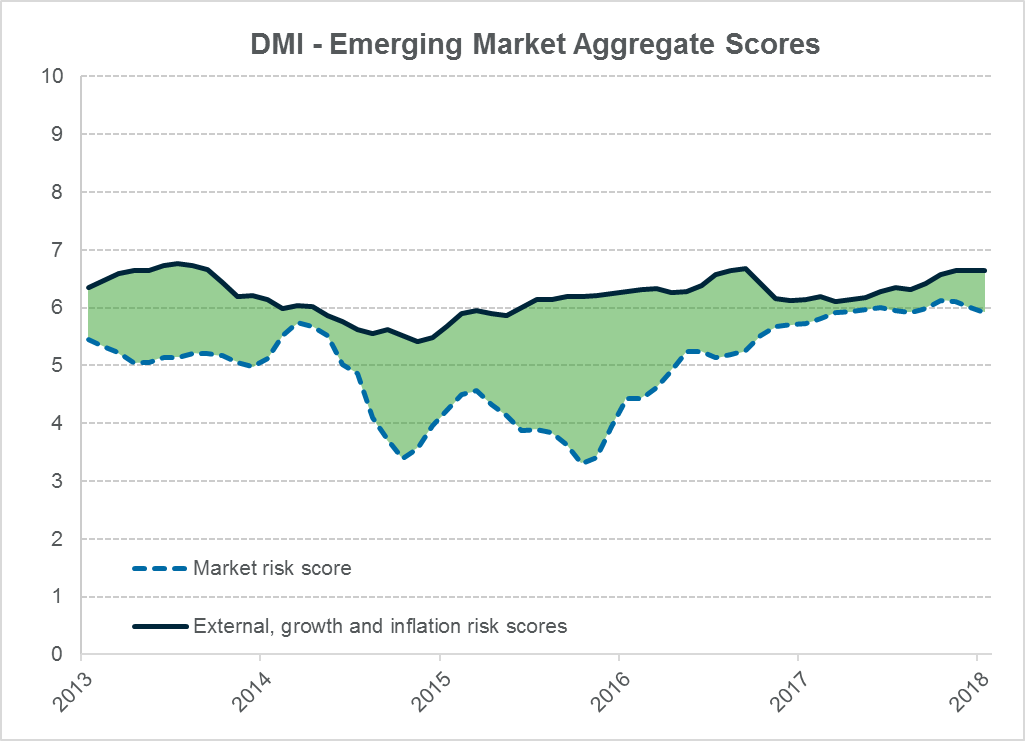 The extent to which abundant global liquidity has been a factor in the EM rally of the past few years is neatly captured by our indicator of economic health, the Dynamic Macroeconomic Index (or DMI). The chart above aggregates performance scores (on a 0-10 scale, where 10 is best) from 21 of the largest and most actively traded EMs. We’ve plotted blended DMI data on economic fundamentals (the black line) against bond market performance (the dashed blue line).

In a nutshell, our analysis suggests that the rally in fixed income instruments witnessed over the past couple of years was only partially attributable to improved economic fundamentals. The only plausible alternative hypothesis is that EM bond markets – along with stocks, currencies and other assets – got a leg-up from super-loose global monetary conditions and the search for yield triggered by rock-bottom interest rates in the developed nations.

Yet what goes up must eventually come down, and this time will be no exception as the Fed et al. shrink their balance sheets and nudge up rates. As if that weren’t enough, EMs face a potential double whammy of external pressures via the trade channel. Faced with a gradual slide towards global protectionism, exports from small open economies are likely to take a hit in the coming years. Those that are heavily dependent on the US market appear most at risk in this regard.

To make matters worse, we maintain our belief that domestic economic drivers are now losing steam. In terms of GDP growth, early 2018 was probably as good as it gets for EMs. As we enter the latter stages of the current business cycle, many larger economies are running into capacity constraints. That means that from here on in, it will become increasingly difficult for developing countries to sustain recent growth rates without stoking inflation.

All of this will be a concern for EM policymakers, since depreciating currencies and rising oil prices are already pushing up the prices of imports. In order to stem inflationary pressures and shore up their external positions, EM central banks will have no option but to push up interest rates in the coming months and years. In theory, at least, higher rates will dampen consumption and investment, weighing on corporate profits and overall levels of economic activity.

No crisis domino effect but EM laggards will be punished

The main question that investors and international firms have to contend with is: how bruising might the next downturn prove to be? As always, it’s difficult to be certain and we wouldn’t want to be complacent about the challenges facing EMs. This is particularly true when it comes to some of the more opaque risks which have been building in the financial sector. One pertinent example is the explosive rise in Chinese corporate leverage over the past few years.

Nonetheless, the good news is that EM current account balances and FX reserves appear to be in better shape than in recent episodes of turbulence, such as the ‘taper tantrum’ of mid-2013. Accordingly, in the absence of a larger shock, it seems unlikely that we’ll witness a string of balance of payments crises. Notably, headline scores for all DMI countries are well above the ‘3’ threshold, below which history suggests a 75% chance of a recession or crisis. 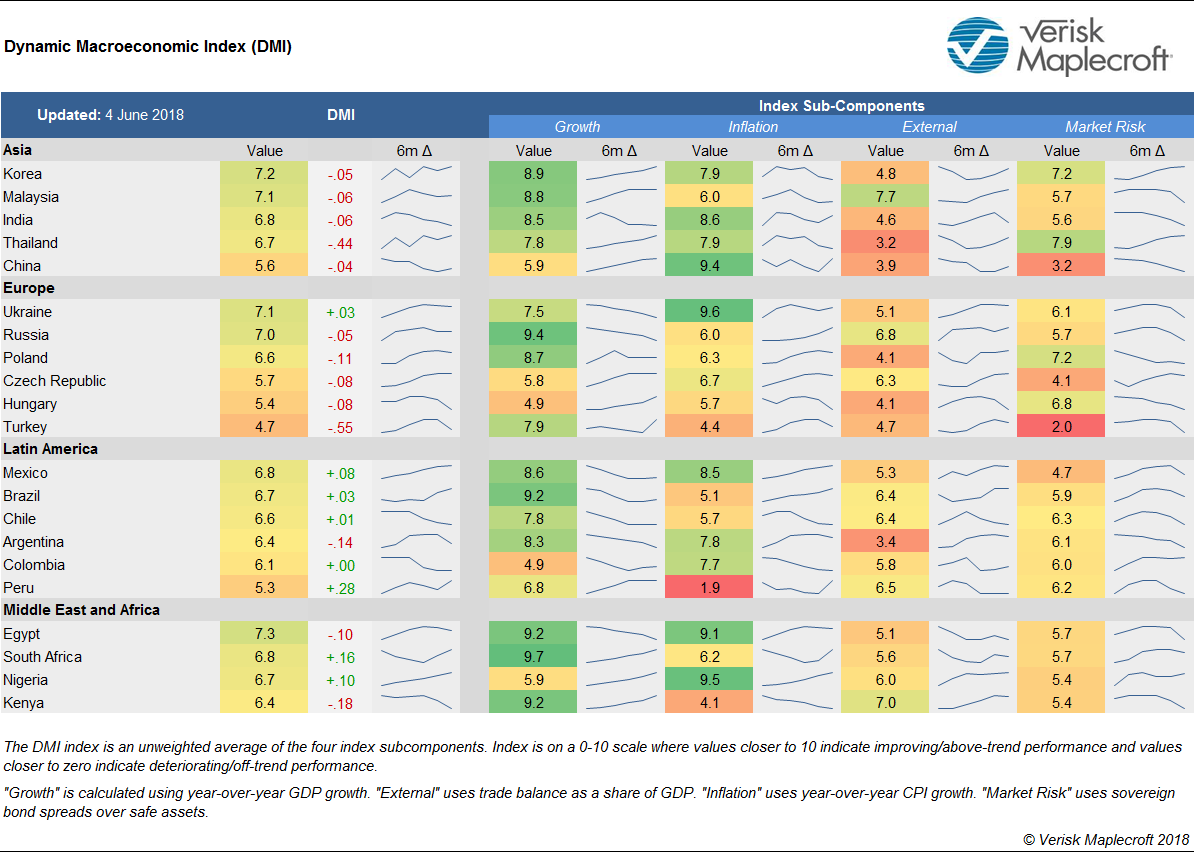 Instead, most EMs face the prospect of several years of slower growth and higher interest rates. This will almost certainly puncture the recent asset market bubble. Of course, some countries will continue to be viewed favourably by investors and more stable, higher-yielding currencies will continue to benefit from the carry trade. But equally, though, we expect EM laggards to be punished more severely as investors become pickier in an environment of fewer dollars.

We’d be particularly cautious of countries with some or all of the following characteristics: erratic policy agendas, shaky macroeconomic fundamentals, and a volatile domestic political situation. As Argentina discovered, even nations slowly overcoming legacy problems will not be free from scrutiny. Those that rely heavily on foreign capital but are unable to get their domestic houses in order face the worrying prospect of being priced out of global credit markets.

Find out more about our institutional investor service.