Since late January 2019, Australian coal exports have been facing lengthy delays of over 40 days to pass through customs at some Chinese ports. Several northern Chinese ports have received word from the central government to extend import restrictions on coal imposed last November to at least May, with shipments from Australia specifically in the firing line.

Steelmakers, power plants and traders have therefore been avoiding purchases of Australian coal, while port authorities in unaffected areas are wary of the possibility that Beijing might suddenly extend import restrictions onto them.

Australia is the world’s largest exporter of coal and the bilateral metals & minerals trade with China is of strategic significance to both countries.

Geopolitical tensions provide one explanation for the delays

These import delays may simply be explained by market-based factors. Our sister company Wood Mackenzie has identified three plausible explanations for why China may be restricting coking coal shipments:

However, the fact that Australian coal exports appear to be facing the brunt of customs delays raises the possibility that political factors may also be at play. The bilateral relationship between Australia and China has been tumultuous in recent years, driven by Canberra’s growing wariness of Beijing’s strategic ambitions, and Beijing’s anger at Canberra’s policy responses.

Our Interstate Tensions Index captures the tempo of negative verbal interactions between Australian and Chinese officials over the past 12 months. The first half of 2018 saw a run of diplomatic clashes before Australia’s unscheduled change of prime minister offered an opportunity for a reset. Although recent developments suggest that this detente may prove short-lived.

Meanwhile, Beijing has a history of stepping up non-tariff measures against foreign corporates as a means to signal its displeasure to their home governments. Australia was seemingly on the receiving end of such treatment in June 2018 when wine exporters faced unusual delays at Chinese ports.

Australia-China relations are prone to outbreaks of geopolitical tensions 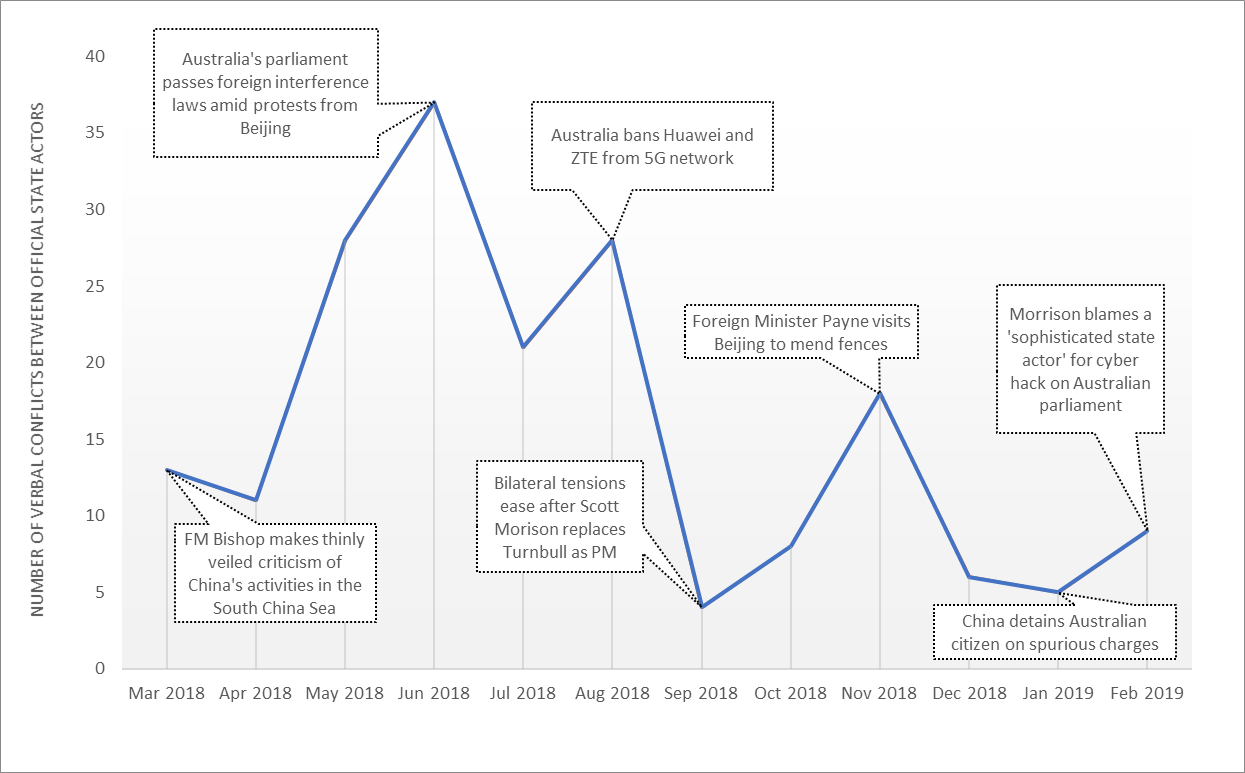 Australia-China relations are prone to outbreaks of geopolitical tensions

Australia became the first country to ban Chinese telecommunication firm Huawei from participating in its 5G networks in August 2018. Beijing is hyper-sensitive to Western pushback against Huawei, particularly since the December 2018 arrest of company CFO, Meng Wanzhou, by ‘Five Eyes’ partner Canada, at the request of the US Justice Department.

Two other developments have caused bilateral tensions to cool and supports the case that China's import restrictions may be a politically-motivated means for Beijing to make its displeasure known to Canberra. The Chinese authorities detained an Australian citizen in late January on spurious-looking charges, which was followed by news in mid-February of a sophisticated cyber-attack targeting Australia’s Parliament, for which China is a prime suspect.

What is the outlook for Australian coal exports to China?

If Beijing is indeed using customs delays to restrict coal imports from Australia, as part of a wider package of measures designed to exert diplomatic pressure on Canberra, then we would expect both sides to proceed carefully.

Given the mutual importance of the coal trade, a disruptive escalation remains unlikely, outside of a major crisis in relations.

Restrictions against Australian coal exports may be designed to send a message to Canberra that Beijing has the means and motivation to make life difficult for Australian businesses, should the geopolitical backdrop necessitate it. If this is the case, then the current bout of delays may well prove short-lived.

One signpost is the volume of coal that China imports from Mongolia in 2019. A significant and sustained uptick in Mongolian coal imports might be a sign that Beijing is seeking to reduce its reliance on Australian coking coal. This would increase the risk of customs delays and import restrictions becoming a more frequent feature of the Australia-China coal trade, depending on the prevailing geopolitical winds.