How will India boost its energy output?

In December, India formed a six-member committee to review the sale of as many as 149 small and marginal oil and gas fields of state-owned ONGC and OIL India to private companies. This follows a high-level meeting in October, where the government began to review the country’s domestic oil and gas production profile as part of a roadmap for cutting oil import dependence by 10% by 2022.

Government estimates show that the identified small fields account for just 5% of India’s crude oil production. Divesting from these smaller fields will help both state-owned enterprises (SOEs) to concentrate their resources on bigger fields that make up 95% of production. For example, freed-up resources will allow both actors to rope in technology partners to improve processes and delivery, either through enhancement contracts or technical service arrangements.

How will India reduce their oil import dependence?

While reducing India’s oil import dependence from the current 83% by 10% in the next four years remains a hefty goal, the planned sale of the smaller fields to private domestic and foreign companies is a step in the right direction. Assuming an improved transparent and competitive selection process, winning private firms should be able to help boost India’s energy output as they can bring with them technology and capital – areas where SOEs are typically constrained due to financial bloat and legacy problems.

The government, however, needs to ensure that the bid is accompanied by very attractive and competitive fiscal terms, sufficient to outweigh the risks that characterise such smaller fields. Our Corporate Exposure Tool (CET) shows that the smaller fields that could potentially go on sale are generally categorised as medium-risk across a range of above-ground risks (see below). Given high-risk scores in community relations for example, companies may find themselves suddenly complicit in violating indigenous people’s rights and other human rights abuses.

We also see important variations among index scores that firms need to consider as part of their risk assessment, and which the government will need to address in order to make the potential sale attractive. For example, ONGC’s smaller fields – or at least those that constitute less than 10% of its production – are located in regions that are considered as high risk in our 2018-Q4 Terrorism Risk and Criminality indices. 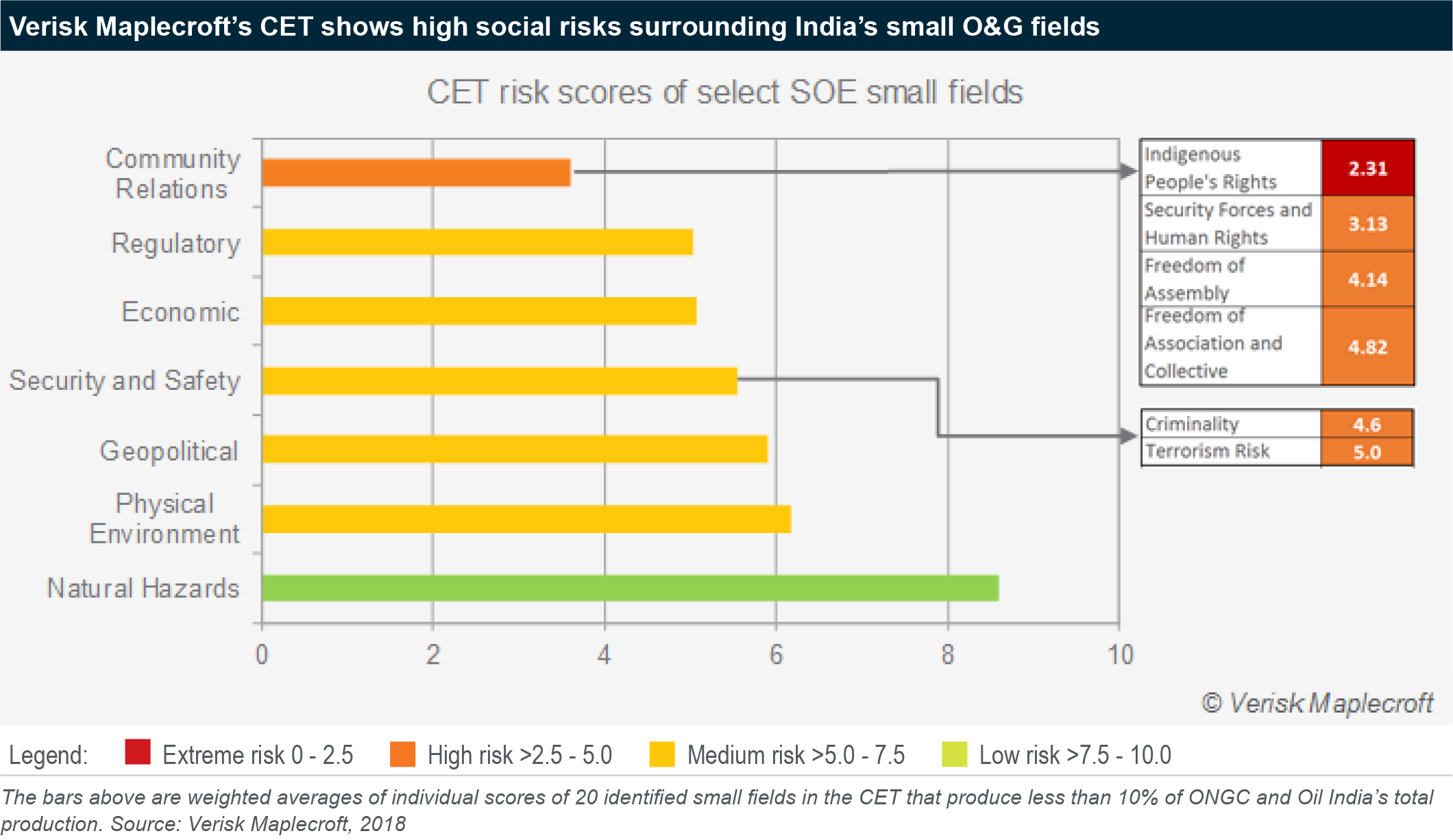 What is the outlook for oil imports to 2022?

While we expect India to undershoot its oil import dependence target for 2022, the government’s attempt to streamline and refocus SOEs’ production towards bigger fields, while levelling up the competition by engaging private firms, should help the country towards its goal. This would gradually improve the country’s high risk score in future iterations of our Energy Security index.

However, we expect a lukewarm reception by market players to the planned sale of the small fields, which will come on top of the still-ongoing second round of India’s DSF bidding of 25 assets. Considering that these smaller fields are not significant contributors to India’s overall production and are also fraught with social and security risks, they are unlikely to receive much-needed investor interest unless they come with highly attractive fiscal terms and revenue sharing arrangements. How this will unfold will depend, in part, on the outcome of next year’s general elections.

Next year’s polls will also be a signpost of how this trend of ‘divestment,’ will continue. Nonetheless, we expect future governments to push for initiatives that will help arrest India’s near stagnant oil and gas production, which has prompted the small fields’ planned sale in the first place.

Find out more about our Corporate Exposure Tool