For investors in Asia Pacific’s oil and gas industry, there is a mix of good and bad news if we look ahead over the next couple of years.

On the upside, the region will remain one the most politically stable in the world, with Indonesia, Australia, China and India – four of the region’s biggest capex hotspots – continuing to offer stable political environments in which to operate.

However, according to our Government Stability Index Projection, downside risks will rise in some key investment destinations. We expect the worst news to come out of Myanmar and Thailand, where upcoming elections will increase the potential for political upheaval and likely stall much needed industry reforms. But, Malaysia and Papua New Guinea (PNG) could also be in for a bumpy political ride with potential implications for investors.

Here’s our roundup of what to watch for across these four markets.

Civilian-military relations in Myanmar will deteriorate over the next two years, particularly ahead of the 2020 general election. Much-needed reforms have already been stifled and the powerful military establishment have ensured they remain the biggest player in Myanmar’s economy, including the oil and gas industry.

Tensions between the armed forces (the ‘Tatmadaw’) and the civilian government led by the National League for Democracy (NLD) are rising and we are forecasting an 85% probability that the military will challenge the executive through constitutional means in 2021-Q1. In fact, we see this as a near certainty. The first salvo in the tussle was fired in early 2019, giving a taste of things to come.  During January and February, the armed forces and the military-backed Union Solidarity and Development Party (USDP) tried to obstruct NLD efforts at constitutional revision that would curb the military’s political influence. The military has explicitly claimed that it would prevent any attempts to change the ‘essence’ of the constitution.

This friction raises the spectre of legislative gridlock, as well as a potentially riskier security environment, over the coming two years. As the truce between the military and some armed ethnic groups will end in April 2019, the Tatmadaw can use its position in the peace talks as leverage to stop the NLD government from fundamentally changing its constitutional privileges. This dynamic all but guarantees that the oil and gas industry will not be a priority for the foreseeable future. While the constitutional amendment effort will not have a direct impact on the upcoming bidding round, the growing friction bodes poorly for investor confidence and has the potential to stymie uptake.

The March election threatens to deepen the rift that brought the country to the brink of civil strife in 2014. A victory by the military-backed Phalang Pracharath party would inflame the opposition which has been side-lined since the military coup. Should the main opposition Pheu Thai Party take the poll, it will have its authority significantly constrained by military-staffed unelected bodies.

Either way, long-held grievances by the opposition will continue to fester. An increase in civil unrest is, therefore, plausible in the wake of the election. Although we project a very slight uptick in Thailand’s stability score by 2021-Q1, reflecting the new government fully settling into office, this is scant consolation for investors. Simply put, regardless of its colours, Thailand’s next administration will be forced to prioritise domestic stability over other issues – including meaningful reform to Thailand's oil and gas industry.

This bodes poorly for the resolution of the country’s Overlapping Claims Area (OCA) dispute with Cambodia, which according to Wood Mackenzie holds up to 11 trillion cubic feet (tcf) of natural gas, among other resources. Despite warm ties between Thailand’s military junta and the Cambodian government, bilateral negotiations have stalled for years and it’s doubtful the next two will yield any progress. 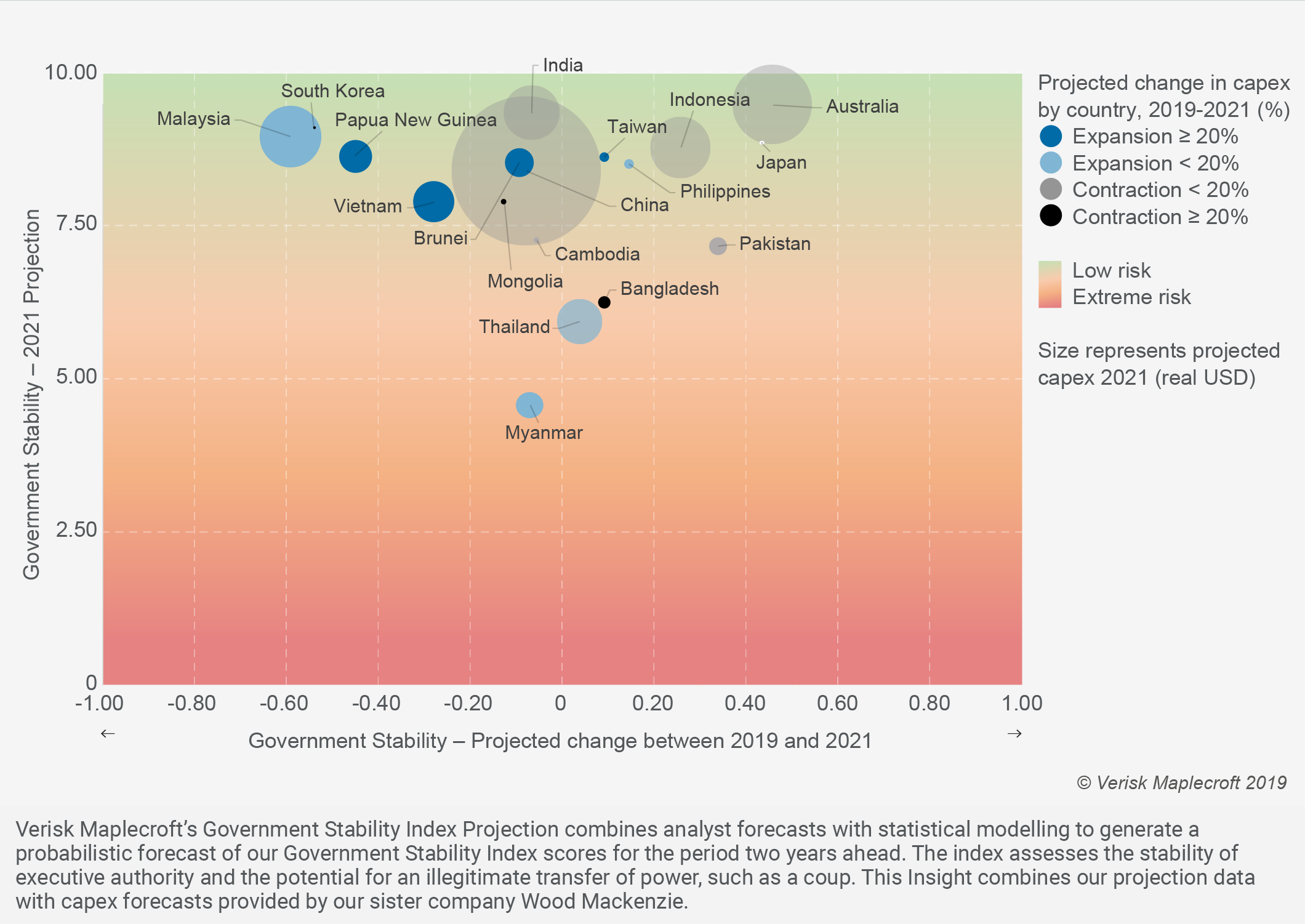 How will India boost its energy output? Read the article

In the first of our other two hotspots, Malaysia will likely see the largest dip in government stability by early 2021. While we expect the handover of power from Prime Minister Mahathir to his political successor Anwar to proceed as planned, it will inevitably trigger some personnel reshuffles and could slow policy-making for some time.

Yet, we cannot rule out a messy transition – or even no transition at all. Evidence of a power struggle between the two politicians suggests that Malaysia risks transitioning from a low risk to a medium risk country in our worst-case scenario. A split in the ruling Pakatan Harapan coalition would have the potential to usher in a political crisis, heightening the risk of civil unrest – particularly in Kuala Lumpur – and paralysing the executive and legislative branches of government for a time. While still an outlier, this worst-case scenario would spell bad news for Malaysia's oil and gas companies, as it would plausibly entail lengthy legislative delays and significant senior personnel reshuffles in government bodies.

In Papua New Guinea, we expect an increase in internal divisions within the government of Prime Minister Peter O’Neill ahead of the 2022 general election. O’Neill has been implicated in several corruption scandals, most recently involving bridge-building contracts in late 2018.

We project a 40% probability of potentially disruptive changes within the government between January 2019 and December 2020. PNG’s history of flawed elections and difficult power transitions suggests that policy-making has the potential to slow ahead of the 2022 vote. This would almost certainly further delay the Total-led Papua LNG project, currently slated to come online by the end of 2024, and frustrate attempts to update the country’s gas policy.

Asia Pacific remains one of the most politically stable regions in the world. Overall, the risk of outright government collapse is low across the region, but for oil and gas investors the need to monitor civil-military tensions, political squabbles, ministerial resignations, cabinet reshuffles and early elections in the countries listed above is highly advised over the next two years. With the multi-decade lifespan of projects, delays in new oil and gas legislation, the derailment of planned projects and increasing uncertainty in the business environment could be costly for the unprepared.

How will India boost its energy output? Read the article