The sixth annual release of our Climate Change and Environmental Risk Atlas reveals that 31% of global economic output will be based in countries facing ‘high’ or ‘extreme risks’ from the impacts of climate change by the year 2025 – a 50% increase on current levels and more than double since the company began researching the issue in 2008.

According to the Climate Change Vulnerability Index (CCVI), which forms a central part of the Atlas, this includes 67 countries whose estimated combined output of $44 trillion will come under increasing threat from the physical impacts of more frequent and extreme climate-related events, such as severe storms, flooding or drought.

Our CCVI has been developed to identify climate-related risks to populations, business and governments over the next 30 years, down to a level of 22km² worldwide. It does so by evaluating three factors: exposure to extreme climate-related events, including sea level rise and future changes in temperature, precipitation and specific humidity; the sensitivity of populations, in terms of health, education, agricultural dependence and available infrastructure; and the adaptive capacity of countries to combat the impacts of climate change, which encompasses, R&D, economic factors, resource security and the effectiveness of government. 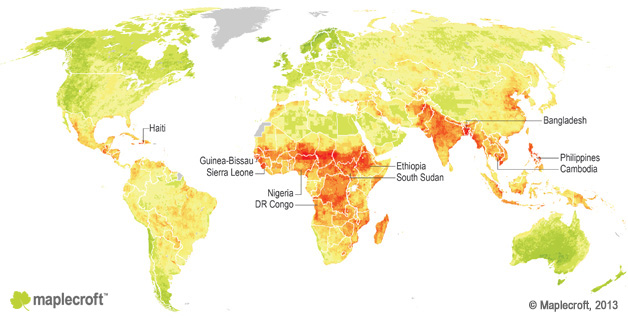 Future estimates of the overall cost of climate change on the global economy include a wide spectrum of opinions. What cannot be disputed is that the ‘high’ and ‘extreme risk’ countries in our CCVI include emerging and developing markets, whose importance to the world economy is ever increasing. By 2025, China’s GDP is estimated to treble from current levels to $28 trillion, while India’s is forecast to rise to $5 trillion – totalling nearly 23% of global economic output between them.

India’s economic exposure to the impacts of extreme climate related events was recently highlighted by Cyclone Phailin. The storm caused an estimated US$4.15 billion of damage to the agriculture and power sectors alone in the state of Odisha, which is also India’s most important mining region. Up to 1 million tons of rice were destroyed, while key infrastructure, including roads, ports, railway and telecommunications were severely damaged, causing major disruption to company operations and the supply chains of industrial users of minerals.

“With global brands investing heavily in vulnerable growth markets to take advantage of the spending power of rising middle class populations, we are seeing increasing business exposure to extreme climate related events on multiple levels, including their operations, supply chains and consumer base," states James Allan, Head of Environment.

"Cyclone Phailin demonstrates the critical need for business to monitor the changing frequency and intensity of climate related events, especially where infrastructure and logistics are weak.”

The ability of highly vulnerable countries to manage the direct impact of extreme events on infrastructure will be a significant factor in mitigating the economic impacts of climate change and may present opportunities for investment. Adaptive measures, such as building flood defences and greater infrastructure resiliency, will, however, require the sustained commitment of governments.

With commercial activity and the middle classes predominantly based in urban centres, we have also calculated the risks to the world’s largest cities to pinpoint where the economic exposure will be highest over the next 30 years.

According to the CCVI’s sub-national calculations, of the 50 cities studied, five present an ‘extreme risk’ – Dhaka in Bangladesh; Mumbai and Kolkata in India; Manila in the Philippines and Thailand’s Bangkok – while only two London and Paris were classified as ‘low risk.’ Shenzhen and the Pearl River Delta, which encompasses the cities of Guangzhou, Dongguan and Foshan and make up China’s manufacturing heartland, are among the most exposed to physical risks from extreme climate-related events.

Meanwhile, the regions facing the most increased levels of risk are West Africa and the Sahel. Our Exposure Index incorporates recently released UN IPCC climate projections for the period up to 2040, and identifies regions that are projected to undergo a significant shift in key climate parameters in that timeframe. Over this period a projected warming of 20C will combine with substantial changes in rainfall and humidity, which will have a significant impact on communities and businesses located in West Africa and the Sahel.

The region’s increased risk is reflected by the inclusion of West Africa’s largest economy, Nigeria, as the world’s sixth most at risk country in the CCVI. Nigeria’s oil sector is left particularly exposed to the impacts of climate related events. Flooding between July-November 2012 resulted in an estimated loss of 500,000 barrels-per-day in oil production, equivalent to over one-fifth of Nigeria’s output. The oil-rich Niger delta is especially vulnerable, with rising sea levels already resulting in erosion and the loss of some oil wells in this area.

Our 6th annual Climate Change and Environmental Risk Atlas provides comprehensive analysis of the key risks to business in the areas of climate change vulnerability and adaptation; emissions and energy use; environmental regulation; and ecosystem services. It includes 26 indices and interactive maps, which have been developed to identify, evaluate and compare climate change and environmental risks down to 22km² worldwide and provide insight into current and emerging trends.

We also produce in-depth Climate Change and Environmental Risk Reports for all countries and cities, which. These utilise sub-national data and maps to identify areas of climate change vulnerability which have the potential to impact on supply chains, current or future business operations, and populations. In addition, they offer comprehensive qualitative analysis of climate change vulnerability, including physical exposure to the future impacts of extreme weather events, the sensitivity of populations, the adaptive capacity of governments, along with the effects on water resources, food security, ecosystems, development and the business environment.