Apparel industry experts have identified East Africa as the industry’s next major sourcing location since 2013. These forecasts often single out Ethiopia as the most attractive investment prospect. The government espouses a “dirt to shirt” policy, and the country boasts favourable investment conditions.

Efficacy of the Regulatory System

Efficacy of the Regulatory System

Ethiopia has invested heavily in its nascent apparel industry: the Hawassa Industrial Park, the largest industrial park in Africa, was inaugurated in 2016, while the construction of two more apparel-specific industrial parks is underway. Furthermore, the government’s 15-year cotton development strategy is expanding the cotton farming sector. 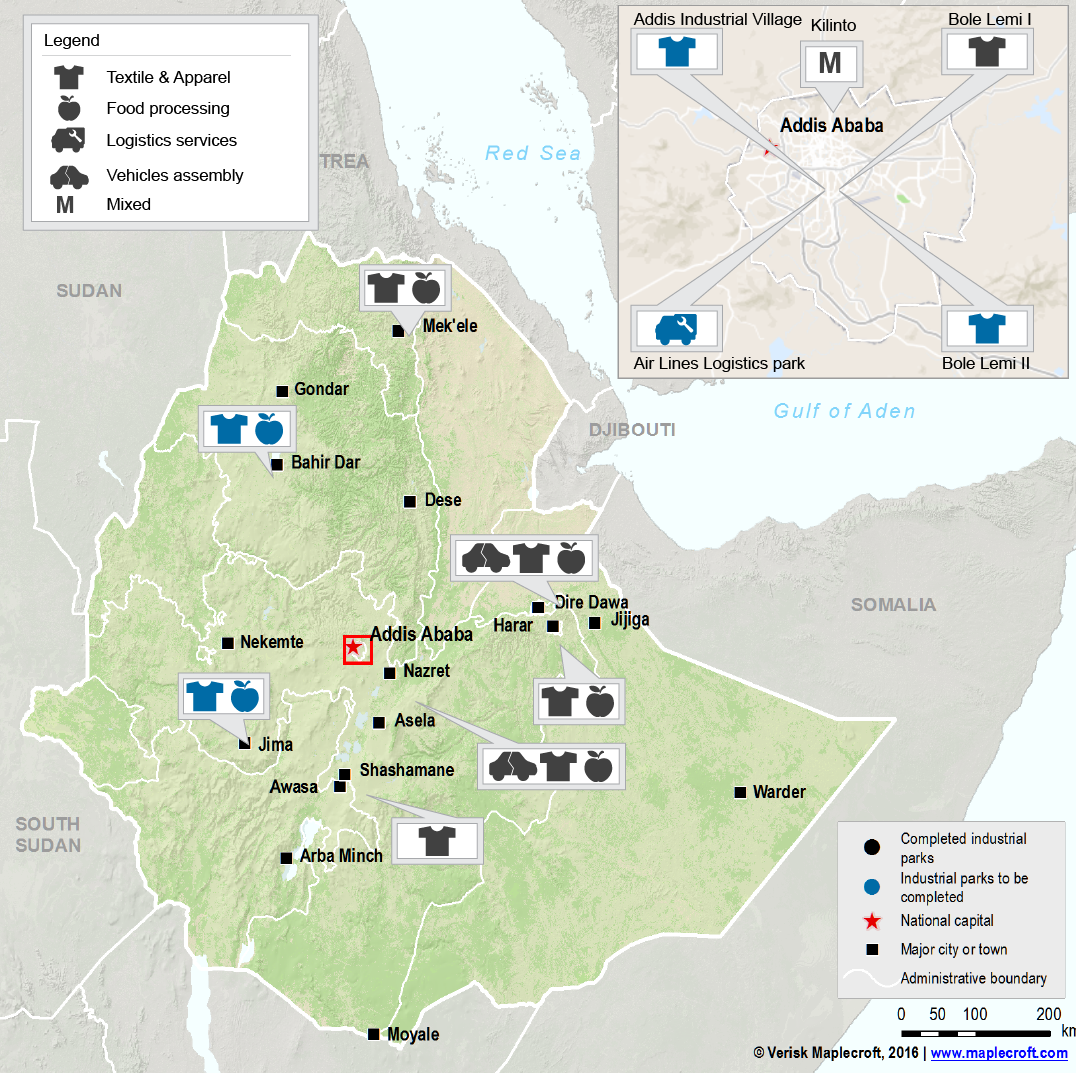 Despite this, the country’s reputation as a stable destination in an unstable region has been severely undermined by protests in 2016. When we conducted on the ground research in February 2017, we found that these issues, along with concerns over labour rights, would likely pose major risks for cotton producers over the coming five to ten years.

The government continues to invest in the cotton sector since the country’s growing textile industry is still reliant on foreign imports. Officials at the Ethiopian Chamber of Commerce confirmed in February that the government was investing in GM crops that it expects to boost yield and quality.

Many of these issues are unlikely to be resolved over the coming five to ten years. The labour law has a number of weaknesses, as confirmed by a legal advisory firm interviewed in Addis Ababa in February. The firm stated that protection standards were particularly low in agribusiness. Workers are frequently exposed to harmful chemicals, without repercussions for employers.

This has been a significant problem for the flower sector. Numerous Dutch firms sourcing from Ethiopia have faced reputational damage domestically as a result. Cotton farmers would face similar accusations, reducing the likelihood that Ethiopian cotton could be used in sustainable fashion lines.

Beyond labour rights, one of the biggest problems facing the sector is the prospect of another eruption of protests over land usage. The 2015-16 protests have caused Ethiopia’s score in our Civil Unrest Index to plummet from 4.15 in 2016-Q3, to 3.52 in 2017-Q1 and 2.70 in 2017-Q2. The protests, which began in Oromia and later spread to Amhara, were sparked by a dispute over land ownership. Several agribusiness and textile assets were attacked, and in some cases destroyed, during the unrest. 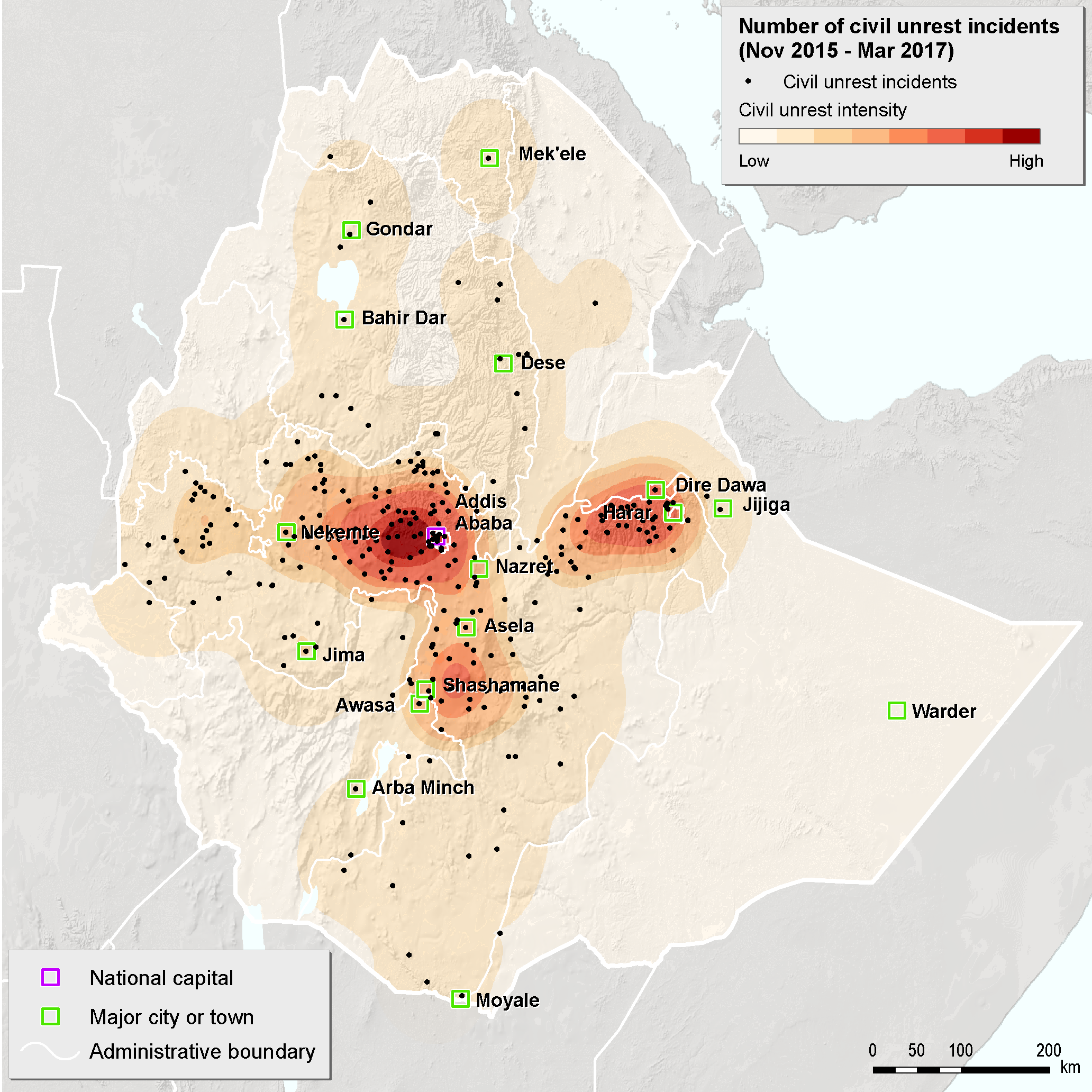 The protests have been quashed, primarily through the use of a repressive state of emergency, but the underlying drivers have not been resolved. It is therefore highly likely that similar protests will erupt again over the coming five to ten years.

A foreign trade advisory interviewed in Addis explained that the grievances that drove attacks on foreign assets remain unaddressed. The advisor stated that foreign investors used to be seen as neutral, but this has changed due to controversies over the government’s land allocation policy. The government assigns ‘empty’ government-owned land to foreign businesses, but this often includes land that communities consider to be jointly-owned grazing land. This is particularly problematic in Oromia and South Omo, due to the importance of cattle raising in these areas.

Concerns over land usage are likely to intensify as drought and food insecurity worsen. Rural livelihoods face growing pressures; climate change is likely to increase both the frequency and severity of droughts, as demonstrated by the country’s extreme risk rating in our Climate Change Vulnerability Index. This, along with population growth rates that risk seeing the population double in the next 30 years, will therefore increase the competition over fertile land. Although the government will continue to favour cash-crops, investors are likely to become increasingly unpopular in the communities that they rely on for both their security and their workforce.

Sector growth set to continue at a slower pace

The government has repeatedly stated that both cotton and textiles are priority areas, and despite the inherent risks, these sectors are therefore highly likely to continue expanding. The government offers a generous raft of incentives to investors in the sectors, including exemption from numerous tax and customs duties for up to 10 years.

However, we forecast that there is a 67% chance that government stability will deteriorate over the next two years, due, primarily, to the government’s failure to tackle the underlying cause of the protests. The cotton sector will be increasingly exposed to security and reputational risks, limiting the opportunity to expand sustainable production. Therefore, businesses viewing Ethiopia as an opportunity to diversify their textile and cotton supply chains will need to navigate a multitude of risks across their product value chains.