Emerging economies will slow down as temperatures rise

Africa and South East Asia are expected to bear the economic brunt of rising temperatures over the next 30 years, as intensifying levels of heat stress are projected to impede worker productivity and hit export revenues.

We've found that not only will workers in the highest risk regions struggle to cope with mounting heat stress, but burgeoning urbanisation and booming demand for air conditioning will also pose a major threat to reliable electricity supplies. Taken together, the risk of disruption for companies operating in, or sourcing from, affected countries will substantially increase unless climate adaptation measures are implemented, the company says.

Combining our Heat Stress data with national economic profiles reveals that 10.8% of the export value in West Africa is projected to be at risk from heat stress by mid-century, compared to 7.9% in Central Africa, 6.1% in MENA, 5.2% in South East Asia and 4.5% in South Asia. Using current values of exports, which don’t consider future growth or diversification of export sectors, this translates to an estimated loss of USD78bn per year for South East Asia and almost USD10bn per year in West Africa.

In all, 48 countries are rated ‘extreme risk’ in our Heat Stress (Future Climate) Index, with African countries accounting for nearly half that number. While Europe is gripped by a heatwave, it remains the region most insulated from the economic impacts of rising heat stress. The 10 lowest risk countries include the UK, Ireland, Finland, Norway, Sweden, and Denmark. However, academics warned on Friday that similar heatwaves will become far more common in Europe without actions to curb emissions, which could drive up heat stress risks.

Agriculture, oil and gas, and mining are sectors where rising heat stress will impact labour capacity the most, as work is highly intense and often outdoors. Heat stress can reduce worker productivity by causing dehydration and fatigue, leading to slower work and even death in extreme instances.

“Supply chain disruption may also drive businesses to consider sourcing from lower risk locations, which would have a major knock-on effect on regional economies.”

Given the importance of the extractives and agricultural sectors to export economies in West Africa, the impacts of rising heat stress on labour capacity are projected to have particularly severe consequences. Oil outputs from Nigeria, West Africa’s largest economy, are likely to suffer, while cocoa exports from Cote d’Ivoire and Ghana are particularly vulnerable.

The manufacturing sector in South East Asia is also under threat. As a result of heat stress-related losses, the export value at risk stands at 5.2% by 2045. Vietnam and Thailand – key exporters of machinery and electrical components – account for almost two thirds of the region’s total manufacturing export value projected to be at risk.

Are energy systems prepared to handle the heat?

Measures to mitigate heat stress risks to workers include a significant uptick in the use of air conditioning. We've identified subsequent increases in energy demand from cooling systems as posing further risks to the business environment, especially in countries that lack robust energy infrastructure.

According to the International Energy Agency, global energy use for cooling amounted to just over 2,000 terawatt hours (TWh) in 2016 – by 2050, this figure is set to triple, which could leave businesses facing spiraling operational costs and greater risks of power outages.

Our Cooling Degree Days Indices identify which countries and cities are expected to see the greatest increase in energy demand for cooling over the next 30 years. Rising temperatures, soaring population growth, and rapid urbanisation mean that the proportion of the global population living in areas classified as ‘extreme risk’ will be five times higher by mid-century, sending energy demand surging.

Africa is set to experience the highest increase in cooling degree days in the future and will face the greatest risks of disruption to electricity supplies. Only 76% of the urban population in Africa currently has access to electricity, and firms already face an average of eight outages a month throughout the region. Africa’s urban population is also expected to expand by 235% by 2050, meaning that power capacity increases are unlikely to keep pace with growing demand. 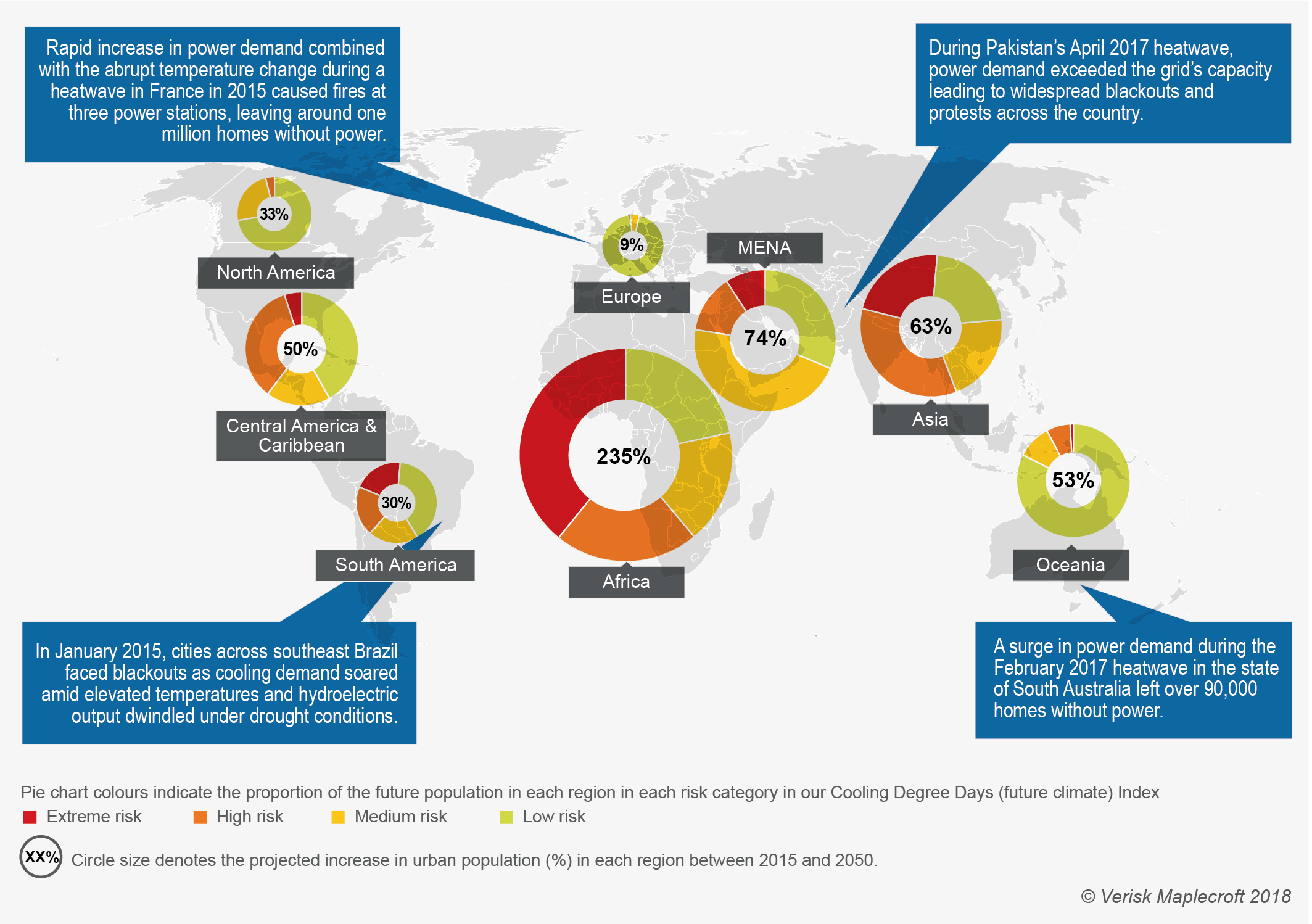 Companies in Asia’s manufacturing hubs, such as Dhaka and Delhi, will also be highly vulnerable to future electricity shortages and blackouts. Power outages already occur regularly during India’s summer heatwaves and the country’s urban population is set to more than double by 2050. The added huge demand on energy infrastructure is likely to prompt more power supply interruptions.

“It’s pretty much established that energy demand for cooling will rise, but the real question for investors is whether aging power systems will be able to handle peak demand,” continues Newman. “Identifying these risks early and implementing measures to mitigate the worst impacts is going to be crucial for businesses operating in these markets over the long-term.”