Like Qatar itself, IOCs operating in the country have accepted the Saudi and Emirati-led boycott as a fact of life that won’t go away anytime soon. Doha’s approach to the crisis boils down to a simple strategy: countering regional isolation with greater engagement with the rest of the world.

Ambitious plans to expand LNG export capacity by 40% over the next five years ensure that IOCs will play a central role in Qatar’s response to the crisis. Although Qatar has adapted well to the new reality of regional isolation, the next phase will be challenging. Firstly, Qatar needs to carefully manage relations with the US to ensure that Washington acts as restraint on Riyadh and Abu Dhabi. And secondly, as both Qatar and the UAE push ahead with ambitious oil and gas expansion plans, IOCs in the Gulf will face growing competition for access to rigs and services.

Almost two years into the crisis Qatar still offers IOCs a positive operating environment. Using data from our Corporate Exposure Tool we have measured the exposure of Middle Eastern NOCs to above-ground risks. As the chart below clearly shows, Qatar Petroleum is the only NOC in the region and among a small handful of NOCs globally in the low-risk category.

If anything, the crisis has helped cement Qatar’s status as one of the most open and business-friendly countries in the region. After easing residency and visa regulations in 2017, a new law was drafted in May 2018 to allow 100% ownership in all sectors. As Qatar continues to push for greater foreign investment, further regulatory and economic liberalisation is likely over the coming years.

More significant for IOCs, however, is the Qatar New Megatrains project which forms a central part of Qatar’s response to the boycott. As the chart below shows, IOC value in the Middle East is already dominated by supermajors in Qatari gas. Although the centre of gravity in Qatar’s oil and gas sector was already shifting towards LNG before the boycott, regional isolation has undoubtedly accelerated the process. The timing of the decision to lift Qatar's LNG export capacity to 110 million tonnes per year by 2024 – less than a month after the outbreak of the crisis – was no coincidence. 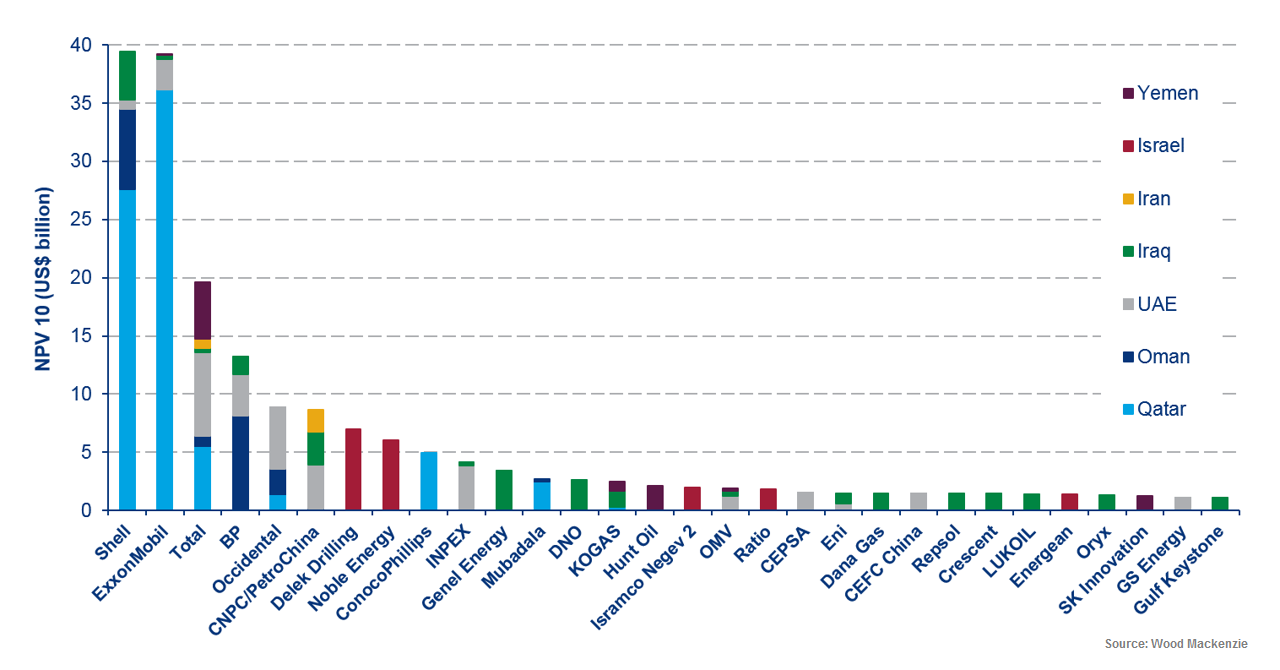 Similarly, the boycott has broadened and deepened Qatar’s engagement with IOCs. Clearly, focusing on global rather than regional expansion makes far greater sense for Qatar as plans to increase gas volumes to the UAE and supply Saudi Arabia with gas have been shelved. The result has been a string of agreements struck by Qatar Petroleum around the world including in Mozambique, South Africa, Mexico and Morocco.

There is very little evidence to suggest that the boycott will be lifted over the next two years at least. Our group forecast assigns an 11% probability that either Saudi Arabia or the UAE will end their diplomatic and economic boycott by June 2020. A key factor is that Qatar has adapted well to the boycott and has little incentive to back down as a result.

Probability of a resolution to Gulf-Qatar crisis remains low

Probability of a resolution to Gulf-Qatar crisis remains low

The chart below underscores the progress that has been made so far. But given the lack of a clearly defined US position on the Gulf-Qatar crisis there will inevitably be a degree of uncertainty over Washington’s willingness and ability to constrain Saudi Arabia and the UAE.

For IOCs, no change doesn’t mean there will be no new challenges. One of the most urgent issues will be the growing competition for oil and gas services as Qatar pushes ahead with Qatar New Megatrains. Competition for rigs and oil and gas services more broadly will also be sharpened by other ambitious expansion plans in the region, most notably in the UAE. A number of large projects are in the pipeline across the Gulf and figures from Wood Mackenzie show that the Middle East accounted for 55% of sanctioned capex globally in 2018.

This crunch on oil and gas services will also be compounded by Qatar’s isolation from the oil and gas infrastructure of its neighbours. The boycott has already forced IOCs in Qatar to adapt their supply chains and replace offshore workers from boycotting nations, most notably Egypt. However, greater regional competition for services will likely prove even more difficult to navigate.

IOCs will also have to get used to Qatar Petroleum taking on an even more active role in the country’s oil and gas sector over the coming years. The Saudi and Emirati-led boycott has not only accelerated Qatar’s LNG expansion plans. It has also played a part in Qatar Petroleum taking a more assertive stance in Qatar itself and beyond.

Qatar Petroleum’s decision in October 2018 take over the operation and management of Idd El Shargi North Dome – one of Qatar’s largest oilfields – is telling. Although Qatar Petroleum will still require assistance from IOCs, the decision to cancel the tender and take on the field itself highlights the company’s growing confidence and ambition. Similarly, the shift towards more stringent fiscal terms – in part as a premium on Qatar’s low above-ground risks profile – shows that Qatar has few concerns over the impact of the boycott on overall investor confidence.

The Saudi and Emirati-led boycott of Qatar has not been solely negative for IOCs. Already, Qatar has absorbed the initial shock while IOCs have adapted their operations and supply chains to the country's regional isolation.

But the main upside from the boycott for IOCs lies in Qatar’s response: greater self-sufficiency, diversification of trade, and giving IOCs a greater stake in the country’s future. In practical terms this strategy has translated into a more international outlook and new commercial opportunities as plans to expand Qatar's LNG capacity gather pace.

The other side of the coin is that Qatar’s ambitious LNG plans will contribute to a looming crunch on oil and gas services in the Persian Gulf. The ambitious schedule for Qatar’s expansion plans means that IOCs will again have to adapt quickly. IOCs will be reassured by the fact that improved relations between Washington and Doha demand greater caution from Saudi Arabia and the UAE. Still, it will become more difficult for all parties involved to silo commercial and political issues effectively.