Despite the rising frequency of anti-corruption protests and high profile scandals, the governments of Brazil, Russia, India and China (BRICs) have made no significant advancement in combatting the issue of corruption over the last four years, reveals our latest annual Corruption Risk Index.

The lack of progress on corruption is having a detrimental effect on the economic performance and political environment of the BRICs countries, as well as exposing foreign companies to high levels of risk of complicity when conducting business with government officials and local partners. Public disillusionment with government corruption is also a key factor in rising levels of societal unrest in the BRICs, states the company.

The Corruption Risk Index (CRI) evaluates 197 countries on the reported prevalence and persistence of corruption in the public and private sectors, as well as the efficiency of governments in tackling the issue. It has been developed to enable companies to identify the countries where the risk of association with corruption is highest.

The World Economic Forum estimates that corruption adds up to 10% to the total cost of doing business globally and up to 25% to the cost of procurement contracts in developing countries. These risks are highest in DR Congo, Somalia, Myanmar, Sudan, Zimbabwe, Equatorial Guinea, Guinea, North Korea, Cambodia and Venezuela, which feature as the 10 most corrupt countries in the CRI. 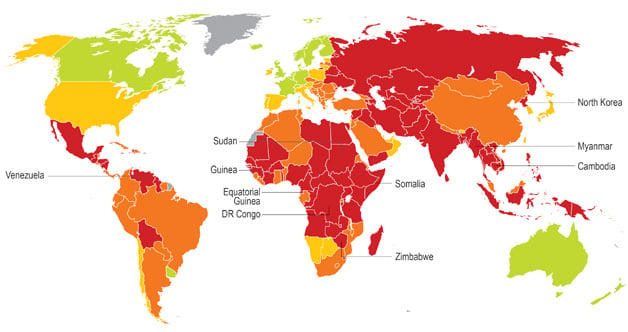 Continued exposure to corruption in the BRICs feeds investor concerns

Our analysis finds that anti-corruption laws are in place in all the BRICs economies, but implementation and enforcement remains consistently weak, indicating a lack of political will to address the issue. As a result, there has been no improvement in the rankings of the BRICs in the CRI for four years. Russia (25thfrom bottom) and India (69th) remain categorised as ‘extreme risk,’ while Brazil’s ranking shows no progress at 90th and is still in the ‘high risk’ category.

Despite an ongoing anti-corruption campaign, championed by President Xi Jinping, China’s position in the index has worsened over the last year, with the country dropping from 88th to 75th within the ‘high risk’ category. High profile scandals have dogged the country over 2013, culminating in a series of arrests of allegedly corrupt officials at the state-owned China National Petroleum Corporation (CNPC) in early September. More worrying for business is the ongoing scrutiny of the pharmaceutical sector, which has seen western multinationals accused of paying bribes to doctors to secure procurement contracts. These cases underscore the risks foreign firms face when engaging with public bodies in growth markets.

With a majority of global brands operating in the BRICs, the results of the CRI may raise concerns for companies that they remain exposed to potential reputational damage and legal repercussions under extraterritorial anti-corruption legislation, such as the UK Bribery Act and the US Foreign Corrupt Practices Act.

“Scandals continue to arise in all of the key growth markets and corruption remains one of the most prominent compliance risks that businesses face,” states  Senior Corruption Analyst Trevor Slack.

“Where corruption is widespread, it also impedes democracy, the rule of law, protection of human rights and economic development.”

These factors have seen corruption surface as a key driver in societal unrest in emerging and developing economies. It was a major grievance of protesters in Brazil in June, where widespread unrest brought many of the country’s commercial centres to a near standstill, while demonstrations throughout China, Russia and India over government corruption have become more frequent. We believe the risks posed by societal unrest may increase if government efforts to combat corruption are not stepped up. In some countries we are able to show that such societal disquiet when met by repression by government security forces could be a leading indicator of political risk, and therefore business risk.

Oil and gas rich economies are sometimes associated with what is referred to as the ‘resource curse,’ whereby widespread corruption and economic mismanagement of natural resources hamper economic growth and development. However, some of the greatest strides in the Corruption Risk Index have been made by several of the world’s emerging hydrocarbon producers.

Mozambique has witnessed the most improvement out of the 197 countries rated in the CRI following the passage of the country’s new anti-corruption law in 2012 and subsequent convictions. The country moved from 51st and ‘extreme risk’ to 71st and ‘high risk’ over the last year. Other notable good performers include Senegal which rose from 34th to 48th in the index, due to the devotion of greater resources to tackling corruption by President Macky Sall; as well as Burkina Faso (54th) and Papua New Guinea (60th) which moved 14 and 18 places up the index respectively. Botswana (154th) remains the African economy with the strongest governance, a decisive factor in the more equitable contribution of mineral wealth to development than has been witnessed in other parts of the continent.

NB: Our Corruption Risk Index is distinct from Transparency International’s Corruption Perceptions Index in that it assesses reported levels of corruption, as opposed to perceptions of corruption. Our assessment takes into account five key factors relating to corruption: frequency; persistence; severity; geographical and sectoral coverage; and the degree of impunity.