Following the FIFA scandal, corruption is now at the forefront of public consciousness, leaving the business practices of large organisations and companies under ever increasing scrutiny around the world. But where is the risk of corruption highest? We have scored and ranked 198 economies on the prevalence of bribery and the effectiveness of official efforts to combat it to reveal the best and worst performing countries.

With 45%, or 33, of the 73 countries rated ‘extreme risk’ in our annual Corruption Risk Index (CRI), Sub-Saharan Africa is identified as the region posing the highest risk to business. Its rapidly growing population and natural resource wealth have increased investment opportunities for business. The downside to this is that companies entering the region’s markets are especially prone to demands of bribery.

In the wake of the FIFA revelations, UK Prime Minister David Cameron has urged a renewed crackdown on the ‘cancer’ of corruption. He emphasised that corruption is not only a burden on business, but also affects security, undermines the fight against terrorism and hinders economic development. Illustrating this are World Bank estimations that corruption adds 10% to business costs globally, with the equivalent of US$1 trillion paid in bribes annually.

“These risks are particularly prevalent in developing economies,” states legal and regulatory analyst Trevor Slack. “Factors such as weak rule of law and a lack of institutional capacity in these markets undermine efforts to combat entrenched systems of patronage, while exposure to corrupt public officials and a reliance on third party agents is also higher.”

We identified corruption as one of the greatest above ground risks for oil, gas and mining companies. Due to the geographic location of below-ground resources their exposure is higher to the developing markets than in other sectors. The CRI identifies many of the world’s major energy producers as ‘extreme risk’ including: Iraq (6th), Russia (joint 10th), Venezuela (17th), Nigeria (20th) and Kazakhstan (47th). Russia, one of the world’s top three energy producers, has seen corruption worsen over the last year, falling from 24th in the 2014 ranking. We partly attribute this to the ongoing conflict in eastern Ukraine and a rising siege mentality, which has had negative implications for its already opaque business environment. 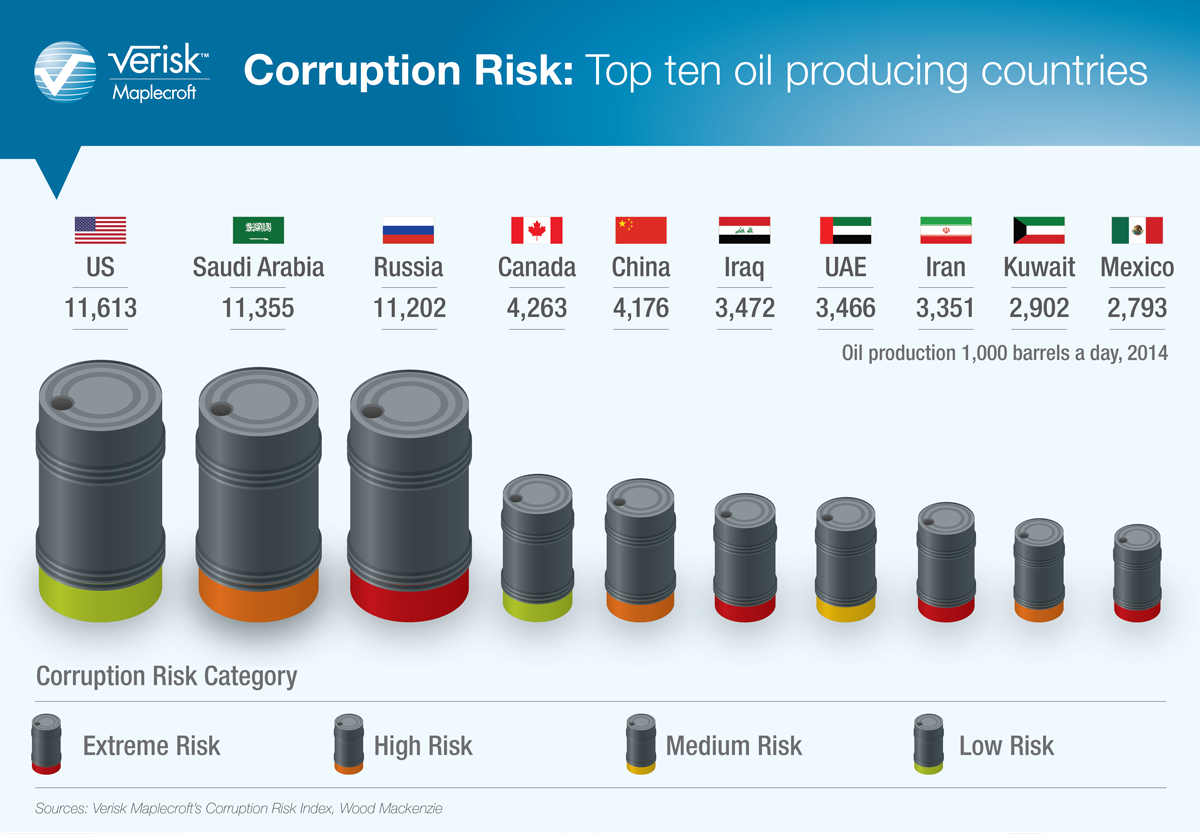 Even outside of the ‘extreme risk’ countries, the potential for exposure to corrupt practices remains a key challenge for the industry. Booming offshore oil production has meant Brazil (ranked 94th and ‘high risk’ in the CRI) has emerged as a major energy player. However, corruption is a major blight on the economy, particularly within the energy sector. This is reflected by the most recent high profile bribery scandal to afflict Brazil’s oil industry, which is possibly the largest in the country’s history.

Elsewhere, the CRI reveals that Asia’s two primary economies, China (ranked 76th) and India (70th), pose a ‘high’ and ‘extreme risk’ to investors respectively. This is despite Beijing’s clampdown on corruption and New Delhi’s establishment of a national anti-corruption ombudsman.

“The FBI’s probe into FIFA reflects a clear trend,” continues Slack. “Since the downturn, anti-corruption enforcement actions have definitely become more aggressive, particularly by the US, and legislation has become tougher. Identifying geographical patterns in corruption and trends in the performance of countries should therefore be an imperative for business.”

Our Corruption Risk Index is an effective tool affording investors with a snapshot of the corruption landscape at the global, regional and national levels. The CRI is complemented by more detailed briefings on particular jurisdictions, analysis of recent legislation and enforcement trends, and studies of corruption risks particular to specific sectors (e.g.: extractives industries). As part of its advisory services, we also provide recommendations for best practices.