Conflict and political violence intensifies in 48 countries since 2013

Over the last six months, levels of conflict and political violence have risen significantly in 48 countries, according to our latest index, which highlights the destabilising effects of societally induced regime change as a key factor in the surge in risk.

Our Conflict and Political Violence Index (CPVI) is calculated twice a year by assessing the risk and severity of conflict and the impact of the violence on society for 197 countries. It identifies Ukraine as seeing the greatest fall in the index, with a drop of 52 places to 35th most at risk. Ukraine’s increase in risk is attributed to violence during the popular uprising in Kiev, which spurred the removal of President Viktor Yanukovych. However, with Russian backed separatist violence in East Ukraine ongoing, we expect the country’s ranking to fall further in 2014.

Sixteen countries are rated as ‘extreme risk’ in the CPVI, including: the Central African Republic (ranked 2nd most at risk), South Sudan (4th), Somalia (6th), DR Congo (7th), and Libya (8th) all of which saw significant increases in risk. Syria, ranked 1st, retains its status as the country with the highest levels of conflict and political violence, while Iraq (3rd), Afghanistan (5th), Sudan (9th), and Pakistan (10th) complete the bottom ten countries. 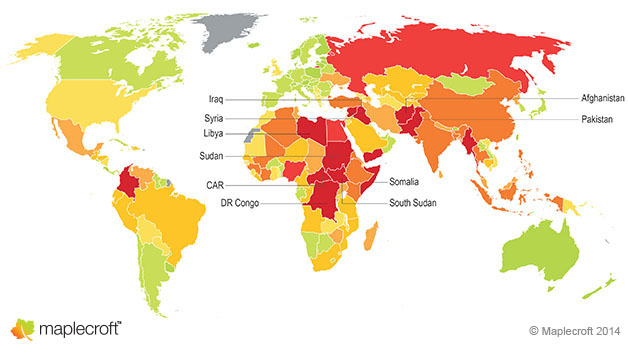 “Over the longer term, analysis of conflict and political violence trends offer an essential barometer for global organisations and governments looking to monitor security risks to investments, populations and the dynamic geopolitical landscape,” states Principal Political Risk Analyst, Charlotte Ingham. “Since 2011, we have identified 76 countries that have seen a significant increase in the risk in the CPVI.”

Many countries witnessing the largest upswing in risk have experienced political upheaval due to societal unrest over civil and political rights and government corruption, which has resulted in rising human rights violations by security forces, conflict and deteriorating security environments. Nowhere is this more evident than in Middle East and North African countries that witnessed ‘Arab uprisings’ in 2011, including Syria, which fell from 69th in 2010 to 1st in 2014, Libya (110th to 8th), and Egypt ( 45th to14th), all of which are classified as ‘extreme risk’ in the index.

Syria’s ranking in the CPVI, reflects not only the severity of the conflict, which has left an estimated 150,000 dead in the last 3 years, but also the impact on its society. The country is now ranked as highest risk for sexual violence in conflict, child soldiers and internally displaced people and refugees.

Elsewhere in the region, Iraq (3rd) endured its bloodiest year since 2008, with our Terrorism Dashboard recording 3278 incidents of terrorism resulting in 6034 deaths and 15023 injuries, compared to 2155 incidents of terrorism, in which 2836 people were killed and 7850 wounded in the previous 12 month period. These figures reveal not only a 50% increase in the number of attacks, but also a significant intensification of violence with attacks proving increasing deadly.

Of particular concern, is Nigeria, now Africa’s largest economy. The country is rated as ‘extreme risk’ in the CPVI for the fifth year running, due to persistent insecurity, including increasing risks of kidnapping and piracy. Violence in the country creates significant challenges for companies in terms of ensuring the safety of employees and facilities, as well as increasing their insurance and security costs. While the Islamist terror threat is likely to remain largely focused on the north-east, the Abuja bus station attack in April 2014, which left at least 75 people dead, demonstrates the ability of Boko Haram to carry out isolated attacks in the central or southern regions of the country.

“Societal unrest and its repression by state security forces acting with impunity are early indicators of political risk – including societally induced regime change and resource nationalism – and have the ability to destabilise the business environment readily,” adds CEO Alyson Warhurst. "More frequent risk monitoring is therefore becoming a business imperative.”


Pinduoduo expands into the US