China has a blueprint to steer the world’s largest auto market away from combustion engines towards a battery-powered future, but it will only succeed if it can secure a reliable supply of the minerals and metals necessary for the production of lithium-ion batteries. Lithium is unsurprisingly a priority on this front. Indeed, the wheels will fall off Beijing’s strategic play to transition towards electric vehicles (EVs) unless China can meet its soaring demand for ‘white petroleum’ amid a global rush.

There are several factors underpinning China’s EV plan. Above all, Beijing sees it as a means to reduce its dependence on oil imports, tackle chronic air pollution, meet its Paris climate targets and create a poster child for the ‘Made in China 2025’ initiative to upgrade the manufacturing sector.

For China to bolster its supply of lithium, we believe that Beijing will likely pursue three strategic objectives in 2018 (and beyond) – namely, to develop its domestic lithium resources, diversify its lithium imports, and increase its influence over the global lithium value chain. The progress China makes towards furthering these goals will go a long way to determining to what extent it can meet its EV ambitions.

China is heavily dependent on imports to satisfy its lithium raw material requirements, so developing its domestic resources is a pressing matter. The country is already the world’s largest consumer of lithium compounds, and domestic demand is set to skyrocket over the coming decades as China switches to EVs. The government wants to see 2 million EVs sold annually by 2020, would like EVs to account for a fifth of new vehicles sales by 2025 and is working on a timetable to phase out traditional vehicles altogether.

The pressure to improve self-sufficiency in supplies of lithium mineral resources (and in other minerals and metals essential in the production of batteries) mirrors the pressure the country faces to reduce its reliance on energy imports. In our Energy Security Index in 2018-Q1, China is the worst-performing country globally in terms of the energy self-sufficiency indicator, as it must import around half its energy needs.

In terms of the scope to expand its domestic lithium output, according to the US Geological Survey China is home to the world’s fourth largest lithium resources and second largest reserves. Yet the Middle Kingdom currently accounts for only around 6% of global mine production, placing it far behind heavyweights such as Australia (41%), Chile (34%) and Argentina (16%). Large-scale domestic extraction has yet to take off because both brine- and rock-derived lithium present problems for producers: the quality of China’s brine deposits is generally lower than that of the deposits found in the ‘Lithium Triangle’ of South America, while the high-altitude terrain that is home to most of the country’s hard-rock deposits is difficult to mine (see figure below).

Despite the challenges associated with large-scale, commercially viable exploitation, China’s lithium mining industry will no doubt receive extensive state-backed investment and policy support this year, and in the future, as Beijing seeks to reduce its external dependency. Indeed, the outlook for domestic brine production in particular looks promising; state-owned China Minmetals announced in September 2017 that it has successfully extracted its first batch of lithium carbonate from a salt lake in Qinghai province for example.

Importing lithium raw materials is likely to remain cheaper than domestic extraction in the coming years, and will thus remain part of Beijing’s long-term industrial strategy. But given the strategic imperative of reducing its import dependency on a commodity so critical to EV expansion, we predict an uptick in China’s domestic lithium production over 2018 and beyond. 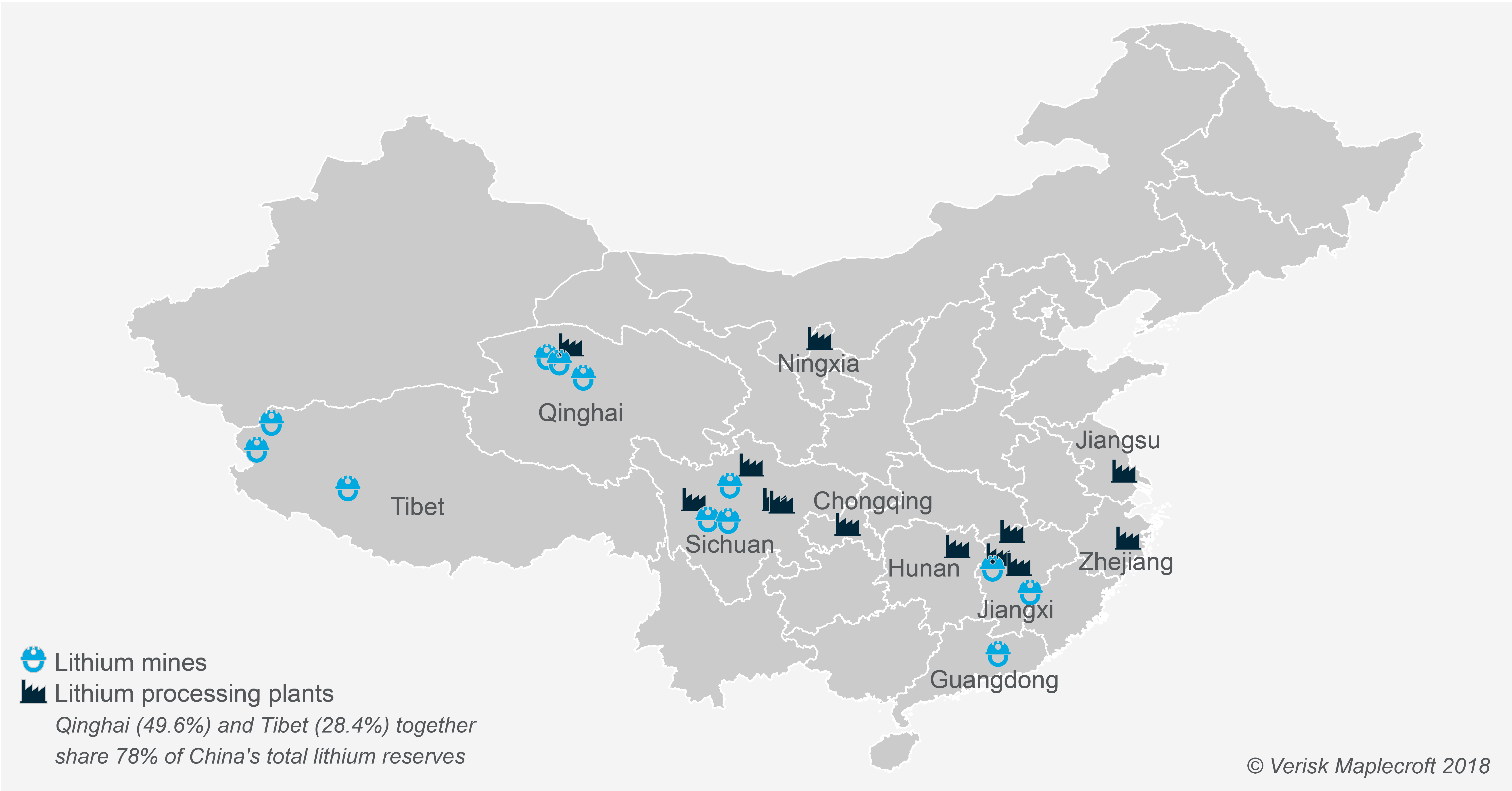 So even factoring in an increase in domestic production, China is set to remain highly dependent on foreign lithium raw materials for the foreseeable future. The government will therefore do what it can to ensure that the country’s import profile remains as secure as possible. China imports the bulk of its upstream lithium supply from the big three producers: Chile, Argentina and Australia (see map below). This geographically concentrated import model exposes China to supply disruptions in the event of, say, a political crisis, export ban or natural disaster in one of these countries.

To reduce its reliance on just a handful of suppliers, Beijing will need to diversify the source of its lithium imports: replicating a model it has successfully adopted in the hydrocarbon sector. Chinese firms are therefore likely to receive official encouragement to sign offtake agreements and strategic partnerships with companies from mid-tier and emerging production hubs – such as Zimbabwe, Brazil, Bolivia and Canada – in order to create a more diversified import model.

We expect 2018 to be another busy year in terms of Chinese firms investing overseas in mineral exploration, ore mining, brine operations and processing facilities as a means to spur additional production and lock in lithium supplies (see timeline below) – a trend driven by the commercial objectives of private companies as well as by Beijing’s strategic thinking.

Global lithium demand is expected to increase four-fold by 2025 and Beijing is wary of relying purely on market forces to meet its own rapidly increasing domestic needs. The Chinese government will therefore provide extensive, if at times unofficial, backing for a global investment spree in the form of cheap credit and diplomatic support to the country’s private and state-owned firms.

A dominant role for Chinese companies across the global value chain would secure preferential access to lithium resources for China’s domestic manufacturers and increase their influence over pricing, particularly in the event of any future supply crunch. Considerable state support for Chinese firms investing in lithium mining assets and processing facilities overseas is more than likely: this will increasingly reach not just traditional lithium producers, such as Tianqi Lithium and Ganfeng Lithium, but beyond to include lithium-ion battery and EV manufacturers, including the likes of CATL, BYD and Great Wall Motors. 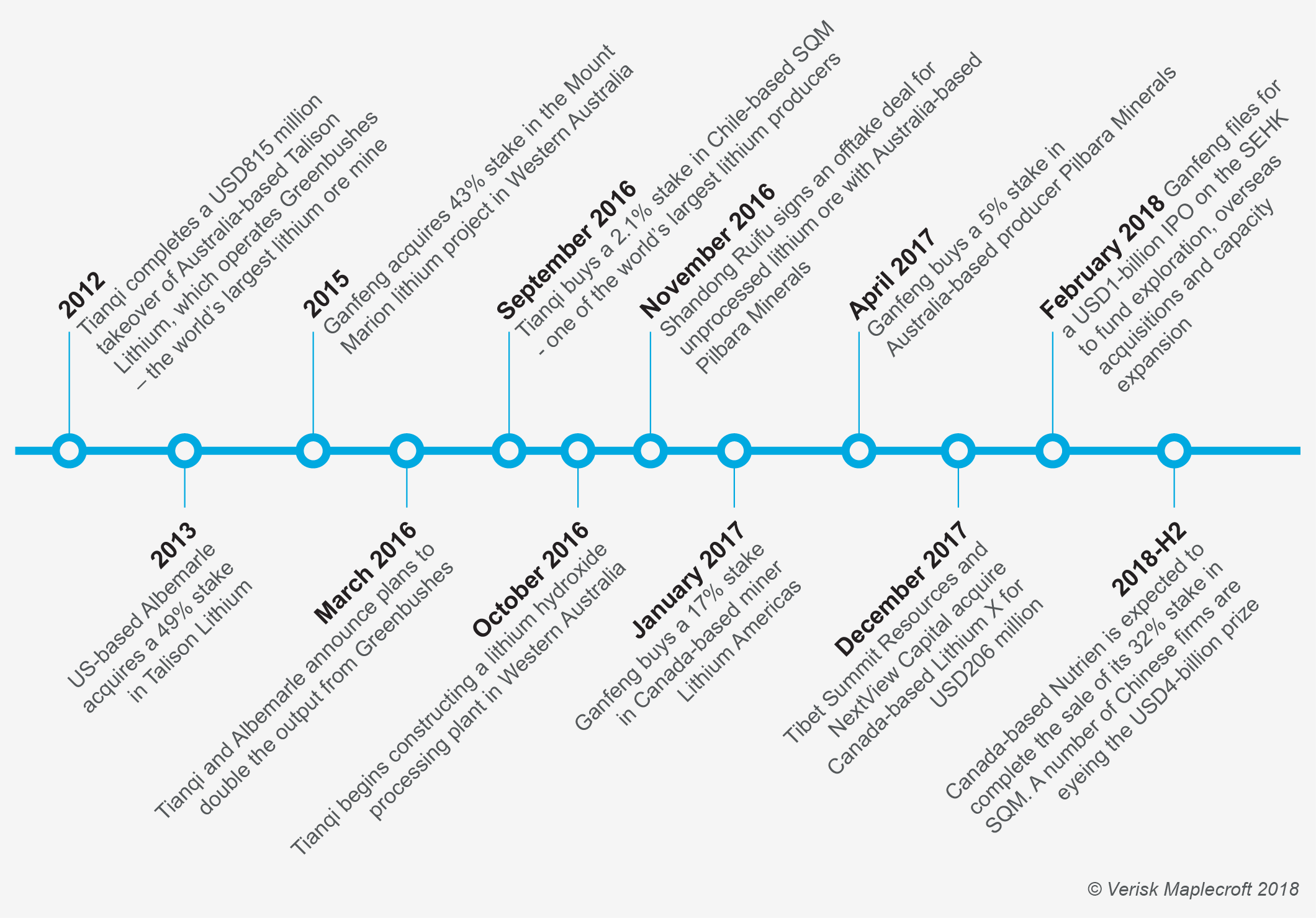 The government has made it crystal clear that transitioning towards EVs is a national priority and that it will wield significant policy levers to ensure that China gets ahead of the game in the global scramble for lithium resources. China is not a market economy where trade and investment decisions are made purely on commercial grounds. Rather, the Chinese Communist Party holds considerable powers of ‘persuasion’ (both carrot and stick) over its domestic firms, and increasingly expects both state-owned and private companies to serve the national interest.

We therefore predict that in 2018 Beijing will press ahead with its three-pronged strategy, which will start to bear fruit in terms of improving the security of the country’s lithium supplies and ensuring that China has the necessary resources to power its battery revolution. After all, a failure to do so would risk the whole endeavour running out of juice.