Moving away from crop-based fuels

The EU is particularly concerned about allowing fuels made from crops like oil palm, soy, maize and sugarcane. Palm oil in particular has been linked to rampant deforestation in Southeast Asia: it is the highest risk commodity for deforestation in our database of 151 raw materials with a score of 0.6/10 (where 0 represents highest risk and 10 represents lowest risk). Soy is also listed as extreme risk for deforestation (2.2/10), sugarcane as high risk (3.2/10) and maize as medium-risk (6.5/10). Notably, deforestation is more prominent in a number of countries from which the EU imports large quantities of raw materials, including palm oil from Indonesia and Malaysia, and sugarcane and soy from Brazil (see below). 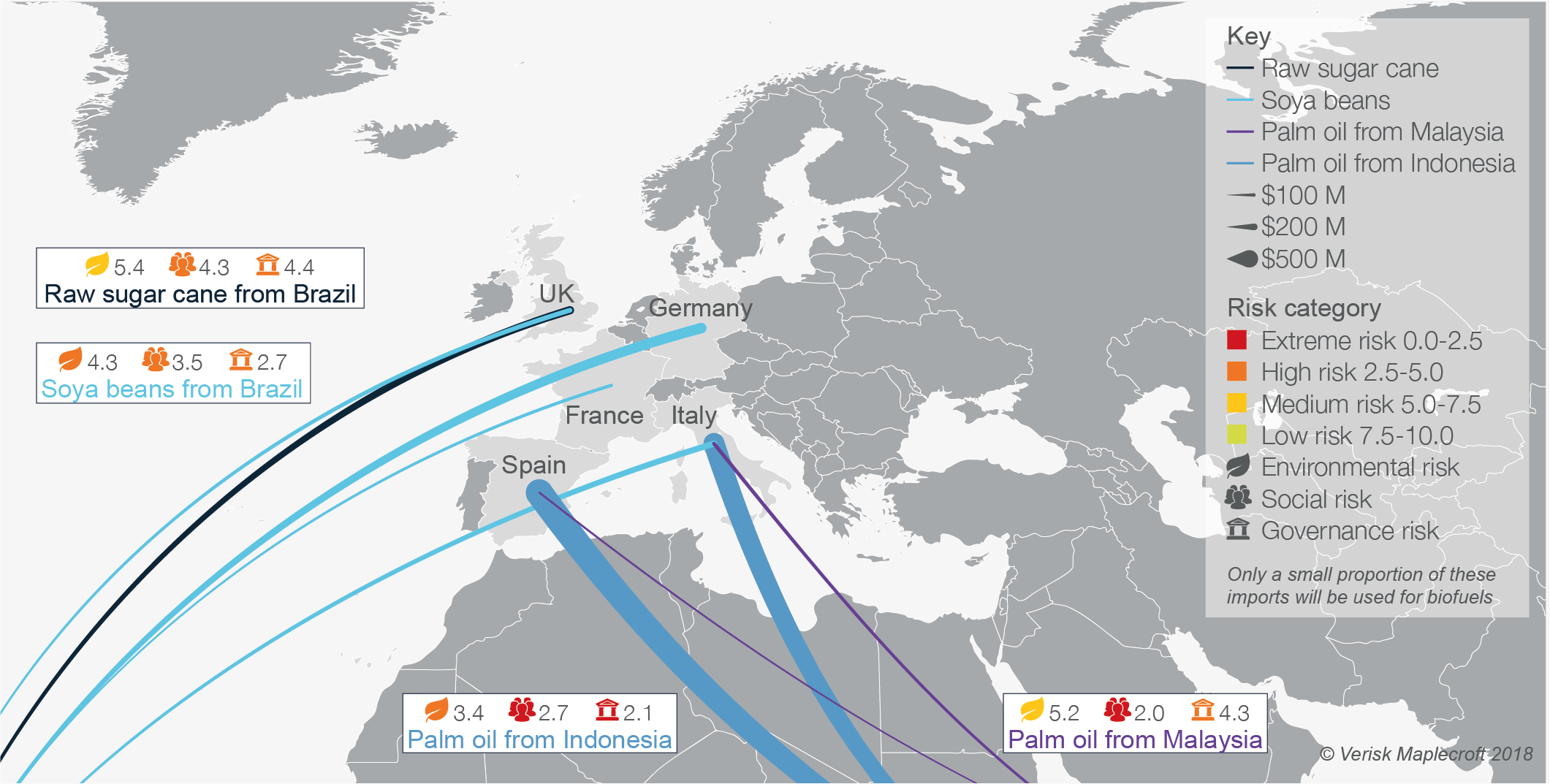 Understandably, EU lawmakers are worried that allowing biofuels to contribute its 10% renewable transport energy target for 2020 is driving clearances of rainforests, wetlands or grasslands, and encouraging famers to grow crops for fuel rather than food. Several studies have suggested that crop-based biofuels are more polluting than the fossil fuels they are designed to replace once indirect land use change (ILUC) emissions, such as rainforest clearances, are factored in.

Campaigners have also linked increases in energy crop production to low wages, forced labour and abuse of vulnerable groups in Africa, Asia and South America. We ranks palm oil as extreme risk for all these factors, though alternatives such as sugarcane or maize have a lower risk profile.

The European Parliament wants to ban palm oil from 2021 and, despite opposition from the UK, France and the Netherlands, some form of prohibition within the EU is likely sooner rather than later. But blanket bans can cause severe economic difficulties for farmers and the local economies they support and international companies sourcing biofuels or raw feedstocks will require a more nuanced approach.

As well as heightened regulatory risks to supply, companies sourcing biofuels face mounting customer and stakeholder concerns over the environmental and social impacts of production.

Differentiating between biofuel sources that carry significant threats of environmental damage and those grown to strict sustainability standards is crucial if companies are to satisfy the growing consumer appetite for responsibly sourced goods and comply with new legislation.

These insights enable companies to take control of their risk profile by proactively identifying and managing environmental and social risks appearing throughout their supply chains.