But low yields will not endure indefinitely, and African governments that have borrowed heavily could struggle to rollover bonds if market conditions shift in the early 2020s. Increased consideration of environmental, social and governance (ESG) metrics would render natural resource-dependent governments like Angola unattractive compared to their peers (see Figure 1). 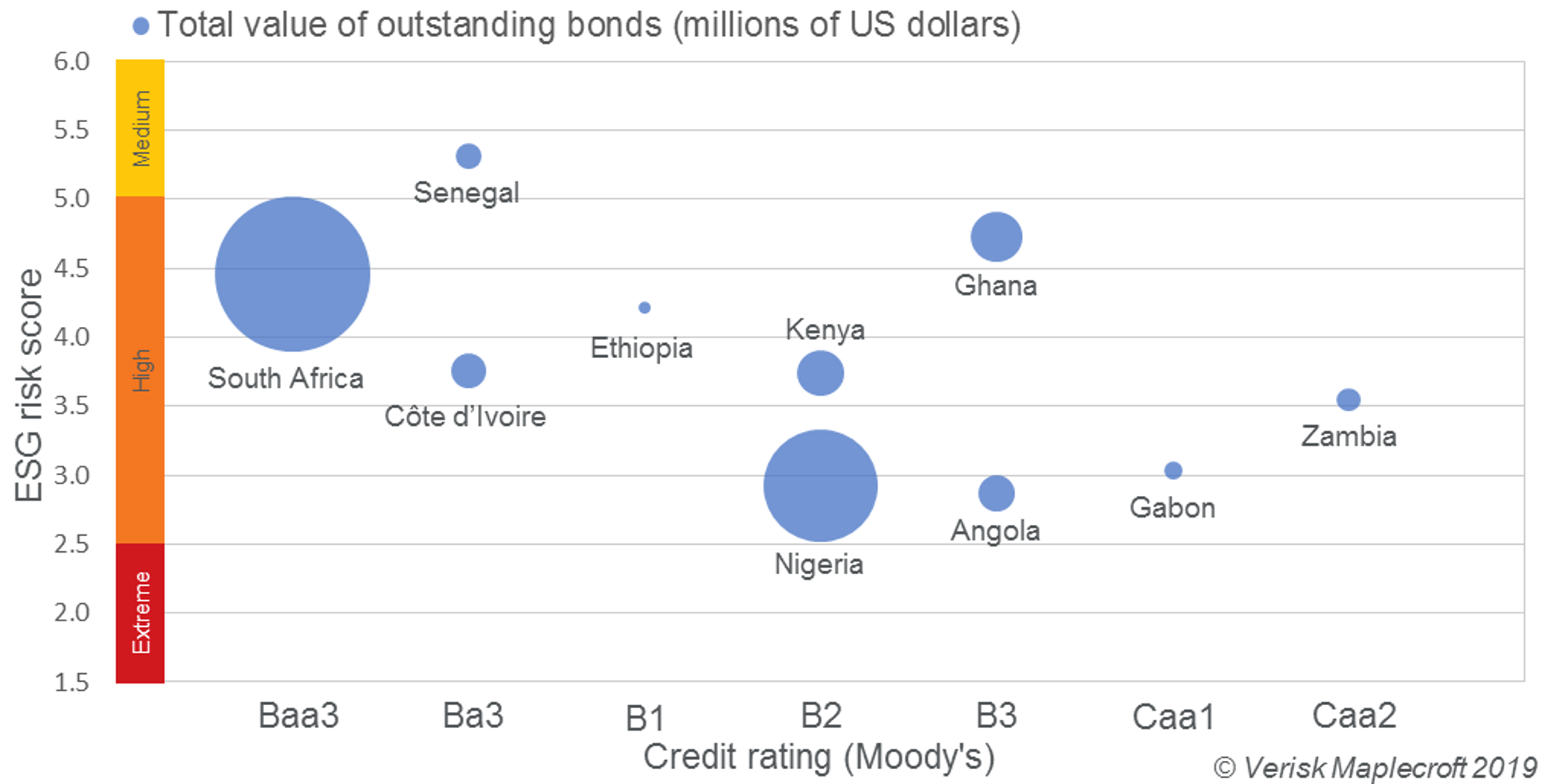 Verisk Maplecroft's ESG Index combines selected environment, social and governance risks to provide a high-level outlook. Its components are: a) an Environment score composed of our Environmental Regulatory Framework Index and three state of the environment indicators (including a forecast on Water Stress risks); b) our Forced Labour Index to represent social risks; and c) our Corruption Index, representing governance risks. Source: FactSet; Verisk Maplecroft, 2019-Q4

Angola has remained mired in recession since issuing its maiden USD1.5 billion Eurobond in November 2015. Despite President Lourenço introducing more favourable terms to international oil companies, crude production has dwindled as existing fields mature. Forex reserves have more than halved since the oil price crash, and a persistent backlog of foreign currency orders has undermined the economic recovery. While the central bank’s decision to abandon the kwanza fixed peg last month should prompt an injection of hard currency, currency devaluation makes dollar-denominated debt more expensive to service in kwanza-terms.

Even before issuing its latest Eurobond last week, borrowing had reached unsustainable levels. Public debt stood at 95% of GDP, with three-quarters of obligations due in foreign currency. The government has little scope to stimulate growth through capital expenditure, since 55% of the 2020 budget will go towards debt servicing.

Angola’s ESG outlook is similarly problematic. Already the worst performing major African economy, our ESG projections point to a persistent gap with its peers. While we predict that Angola’s current score of 2.87/10.00 will improve to 3.15/10.00 by 2021-Q4 – thanks largely to President Lourenço’s anti-corruption campaign – the country will continue to trail rival Nigeria. With ESG metrics of growing interest to investors, Angola will likely pay a premium to rollover its first Eurobond when this matures in 2025.

Nigeria could get caught out if investor calculations change next year

Like Angola, Nigeria’s poor economic fundamentals and stubborn ESG performance will complicate debt management. While the 2020 budget adopted a realistic benchmark oil price of USD57 per barrel, it assumed no change in the official exchange rate of NGN305 to the dollar. This will require the central bank to continue to intervene to defend the naira, eating through forex reserves which have remained stubbornly low since 2014. Despite some progress, hard currency holdings have declined by USD4 billion over the last six months alone (see Figure 2). 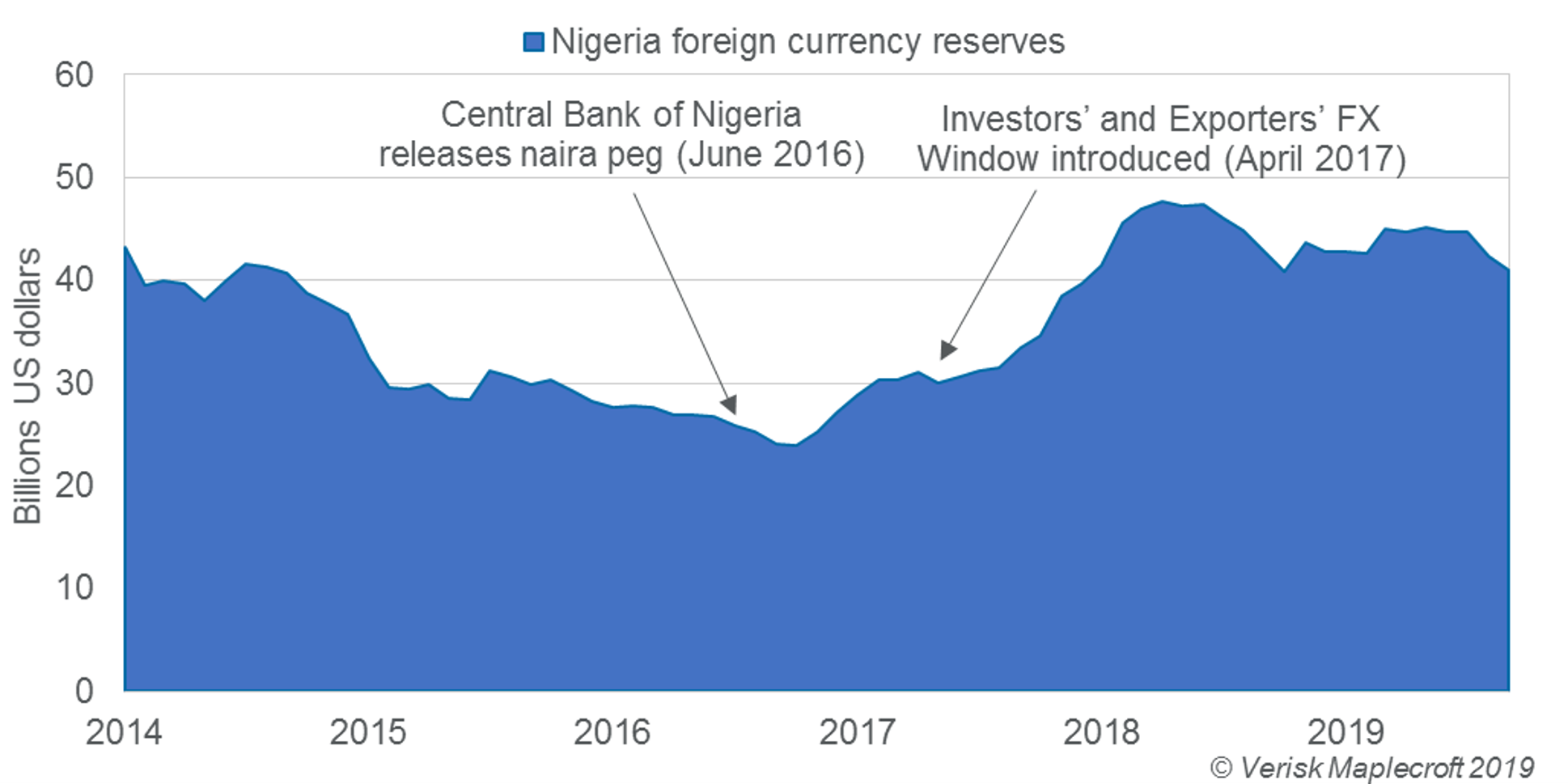 We expect persistently low revenue collection rates to blight budget implementation, undermine growth, and increase the probability of President Buhari rolling-over existing loans. Although most of Nigeria’s borrowing is via the domestic market, the sovereign could find itself unstuck if investors’ demand for EM debt shifts before it moves to refinance USD500 million of Eurobonds maturing in January 2021. Nigeria’s relatively low external debt-to-GDP ratio fails to capture the high cost of domestic borrowing or reflect that more than half of government revenues are committed to debt servicing.

Rolling over external debt could become the norm among Africa's more diversified economies too, with investors financing political give-aways rather than growth-boosting investments. Ghana has announced its intention to tap the market for USD3 billion next year. This will enable the government to cover the first of three instalments on its USD750 million bond, due in September 2020, and, more importantly, to boost spending ahead of December elections.

Although growth remains robust at 6%, and finance minister Ken Ofori-Atta has instituted a fiscal responsibility law, the 2020 budget foresees government expenditure increasing by a fifth.

Ofori-Atta will need to convince markets that borrowing is under control and that state funds will be spent productively rather than squandered to secure re-election in December 2020. Investors will also be looking for progress in renegotiating take-or-pay power contracts from independent power producers and Eni’s Sankofa gas project, which have consumed over USD1 billion of state funds in the past year alone.

Resource-dependent Zambia offers investors a cautionary tale for those underestimating the importance of the governance pillar of ESG. In less than five years, President Lungu’s reckless borrowing spree has seen debt-to-GDP jump from a manageable 42% in 2015 to 94% in 2019.

The USD1.5 billion earmarked for external debt servicing in the 2020 budget exceeds Zambia’s hard currency reserves. This will force the government to seek USD2.1 billion in foreign financing next year.

Lacklustre growth prospects, compounded by continued electricity blackouts, raise questions as to who would lend to Zambia and on what terms. Although the first tranche of USD3 billion of Eurobonds is not due until September 2022, markets have already priced-in default risks. Zambia’s bond spreads continue to deviate from the 5-year mean, while its peers have remained relatively consistent over the course of 2019 (see Figure 3).

With President Lungu stubbornly resisting support from the IMF ahead of the August 2021 election, Zambia remains highly vulnerable to externalities. The prospect of South Africa losing its solitary investment grade credit rating would likely prompt a mass sell-off of national and municipal bonds, complicating refinancing for other sovereigns on the continent. In the game of musical chairs, Zambia could be the first African sovereign to find itself without a place of refuge when its debts come due.